The novelist talks about HBO's adaptation of his epic volume 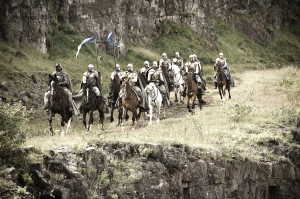 George R.R. Martin’s novels in his A SONG OF ICE AND FIRE series about the mythical kingdom of Westeros are each almost the size of a piece of furniture. The saga of the battle for the crown is now being played out on HBO’s GAME OF THRONES, which concludes its first season Sunday night at 9 PM. The series was picked up for a second season almost immediately after its first episode premiered. Martin says he is among those who are surprised that his huge tome – the HBO show takes its name from the first volume – was brought to the screen, large or small. He certainly didn’t think that the book’s widely-acclaimed quality meant that it should be dramatized.

“First of all,” Martin chuckles, “I don’t think I ever think [of his writing], ‘Wow, this is so good.’ I think, ‘Oh, thank God it’s finished. Now I can finally send it to my editor and get him off my back and he’ll stop bugging me about it.’ I actually never thought this would be adapted. I mean, although I began as a prose writer, and sold my first story in 1979, I worked in television and film for ten years, from the mid-Eighties to the mid-Nineties, before I returned to prose and my first love, to writing this series [of books]. All the time that I was working in television and film, I would write these first drafts, and the producer or the studio or whoever was in charge would say, ‘This is great, George, but we’d need three times the budget to do it. It’s too long and it’s too expensive. You have to cut it down.’ And that’s what I would do. My second draft and my third draft and my fourth draft, I would combine characters, I would cut out battle scenes, make it so we didn’t need so many matte paintings, make it so we didn’t need so many special effects. And finally, ultimately, I would arrive at a shooting script that was feasible and we’d produce it.” 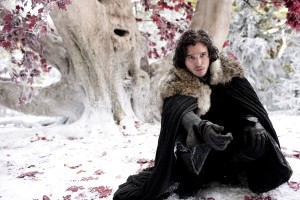 Doing that for ten years though, made Martin “sick of it” so he went back to his novel writing.

“I said, ‘I’m going to write a book just for me,” notes Martin. “I’m going to write something that is as epic and as huge as my imagination can contain. I’m going to have hundreds of characters, I’m going to have gigantic battles, I’m going to have amazing vistas and castles, things like that, because I don’t have to worry about a budget and a production schedule and how we’re going to do this. This is in prose. All I need are words and my imagination and the reader’s imagination to do this.’ So it’s ironic that here we all are and we’re producing it [laughs]. But thankfully, [executive producers/show runners] David [Benioff] and Dan [D.B. Weiss] have to solve all the problems. I don’t. They have to take this thing that was never intended to be a television show or a film and adapt it to television, and so far, they’re doing a hell of a job with it. Although they have many challenges to come, because the first season is the first season, but there will be a second season and a third season and it just gets bigger and harder. There are many more sets, there are still new characters coming into it.”

Virtually all of the characters in GAME OF THRONES are highly complex in both moral and narrative terms. How does Martin determine as he writes when he needs to add a new character? Martin initially hesitates to answer, saying “It’s just a feeling,” before going into an explanation. 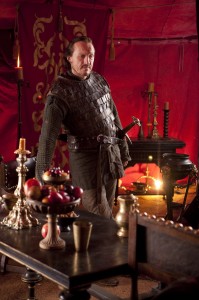 This style of writing will also be a challenge for the executive producers in Season 2 according to Martin.

“As the book begins, basically, everybody is together in Winterfell – the whole [Stark] family is together, with the exception of Danny, who is off on the other continent,” says Martin. “But as the series goes on, the characters split and every character winds up separate from the other characters, and as they wind up separate, they meet other people, they fall in with other people – friends, enemies, passing acquaintances – so the cast just grows larger and larger until you have your original seven or eight viewpoint characters and maybe a new viewpoint character, each of whom is surrounded by their own circle of secondary and tertiary characters. It’s a real challenge [laughs]. Dan and David are going to have to wrestle with this as the series goes on, because there is a limit to how many actors you can afford to pay. I can invent new characters all the time, ‘And yes, and then three people came in, Bill, Sam and Harry.’ David and Dan have to cast Bill, Sam and Harry and pay Bill, Sam and Harry, and that’s another hit on our budget.”

The first season of GAME OF THRONES consists of ten hour-long episodes. Does Martin feel that is enough time to properly encompass the story of his first book in the series?

“I think ten hours will prove to be enough,” he replies. “You’re always a little greedy. I would not have minded twelve hours. At one point, when we were discussing the season, we were hoping to get a season order, we didn’t know how many episodes it would be, and I know some of the other HBO shows – I think BOARDWALK EMPIRE was twelve hours. So I was sort of, ‘Well, twelve hours would be good.’ Ten worked well, but you always hope for more time and more money,” he laughs.

Although as a producer he had the option of doing so, Martin says he didn’t read most of the GAME scripts before seeing the episodes, except for the pilot episode.

“I’ve seen the breakdowns of how it would be divided into episodes, but I haven’t ready any of the subsequent scripts except of course my own,” he says. “I did write an episode of the show. I wrote episode eight, ‘The Pointy End.’”

It is agreed by the GAME company and by fans that the series is fairly faithful to Martin’s novels, although Martin says this is more due to Benioff and Weiss’s decisions as producers than his own contributions to the HBO version.

“They have all the leeway they want. I have no legal control over this project, I have no right of approval, so David and Dan could throw out everything and begin an entire new cast of characters if they so choose – but I trust that they will not,” he laughs..

How did Martin feel when he first saw the pilot? “I was pretty excited,” he enthuses.

As Martin is still working on the SONG OF ICE AND FIRE novels, is there anything that he’s seen in the dramatized version that has sparked any ideas for the books, or does he see the prose and the HBO edition as two separate entities?

“Well,” Martin replies, “they’re not separate entities, but I haven’t seen anything that I would necessarily add. David and Dan are doing a great job of adapting the books and explaining things in visual terms and cinematic terms that I do by other means in prose. The major impact going forward, if there is any impact in changing what I had in mind, might be the actors. When I first saw [the still photo that came with] the audition tape for Natalia Tena, who plays Osha, I said, ‘Why are they reading her for this part? She’s all wrong for this part. She’s too young, she’s too pretty.’ And then I saw her audition and she was incredible, and I wrote David and Dan right away, so I asked, ‘Have you heard [whether she got the part]? She’s amazing. I couldn’t take my eyes off her in this audition. She’s so much more interesting than the other people we’re reading, even though the other people are closer to what’s in the book.’ So that’s a case where they actually, by the actress that they’ve cast, have made a character more interesting than the character that I describe in the books. So when I bring her back, I’m going to have to make her more interesting than she previously was, because I think there’s a lot of stuff there and I think that actress could do a good job with it. For the most part, I don’t know what impulses will seize me, but my goal is to avoid being influenced by that, because I’ve been working on this thing since 1991 and I have a very strong vision of where it should go and what I have to do, and I don’t want to be distracted by that, by external considerations.”