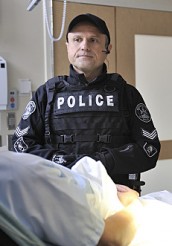 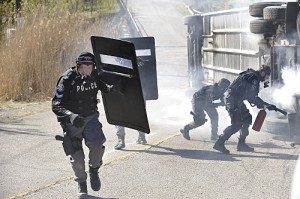 FLASHPOINT is a series that is not only filmed in Toronto, it’s actually set in Toronto. The show concerns a Canadian SWAT team, which provides Canadians with a homegrown action drama and Americans with a window into how our northern neighbors handle violent crime and hostage situations.

In one of those odd international scheduling situations, Season Four of FLASHPOINT began earlier in June in CTV, while in the U.S., Season Three is concluding on CBS tonight. This makes discussing spoilers a somewhat tricky issue for leading man Enrico Colantoni, who stars in the series as Sgt. Gregory Parker.

Toronto native Colantoni does his best not to give away scenes Canadians have seen but are still coming up for American audiences. The actor has a cult following for playing another lawman – Keith Mars on VERONICA MARS – and will forever be loved by many for his turn as the Thermian alien leader in GALAXY QUEST.

ASSIGNMENT X: One of the bigger crises Parker and the team have faced was the line of duty loss of Lewis Young, played by Mark Taylor.

ENRICO COLANTONI: He stepped on a landmine. So that was our cliffhanger for the end of last season.

AX: Not that you ever want to lose a cast mate, but in terms of what it allowed your character to express, was it satisfying as an actor getting to play the fallout from that?

COLANTONI: We didn’t like losing a character. When you’re attached to somebody in real life and you have to see them go, it certainly makes your job easier to play along [with the real feelings] and use those emotions.

AX: When you were looking for another project after VERONICA MARS, did you think, “If I play another law enforcement man, I’d like to be tougher this time”?

COLANTONI: The challenge is always in what makes a character different from any other character. This guy happens to be a sergeant. It took me three days to hang out with the actual ETF to actually realize how it worked. It’s very organized. Ed Lane is the team leader; I’m the sergeant. He’s in charge of the team; I’m in charge of him and the team, and there’s the chain of command.

AX: How do you feel about acting in all that heavy SWAT gear?

COLANTONI: I’ll tell you something. The first episode where Greg Parker wasn’t in his uniform, I felt vulnerable. And not superhuman. That uniform is very special. You put it on and suddenly you feel like the authority is inherent in the costume. That uniform is so empowering and so universal an image to anybody, they recognize it as authority and therefore you can do less [gesturing as an actor].

AX: Apart from just wearing the suit, which could be kind of sweaty and tiring after not too long, are there any particular physical challenges in the part?

COLANTONI: I’ve developed a sciatic thing from standing up and running up stairs. I get a lot of talking and a lot of sitting. But that’s the thing. With the sciatica, it’d be better to run up the stairs than just standing around talking. Probably not the answer you were expecting, but that’s the truth.

AX: Your FLASHPOINT producer Bill Mustos has said that all of the SWAT paraphernalia you use on the show exists in the real world, but that many SWAT teams can’t actually afford the items. Does FLASHPONT comment on this at all?

COLANTONI: No. We don’t stick it to them at all. We’re very respectful of what they do. We just stick to the entertainment value.

AX: Have they come up with any new gear or gizmos this season that have been particularly exciting?

COLANTONI: I’m trying to think. Nothing so exciting that I got to use it, but everybody else usually does [laughs]. There have been a lot of great guest stars this year – Mark Valley, Victor Garber, just to name two. We were very excited about them.

AX: Is the response to the show different in Canada and in the United States?

COLANTONI: Absolutely. Canadian audiences appreciate it with a sense of pride, because it is a Canadian show and we represent Toronto and Canadian and the police force. And American audiences – a lot of people [in the U.S. watch FLASHPOINT], but I remember when we were on Friday nights in the spring [when the series premiered on CBS in 2009]. We didn’t have  many viewers and now it’s a summer [slot]. Those Americans who have seen the show appreciate it, see it’s clean, the ethics, the sensibilities are clean and honest.

AX: Canada doesn’t seem to have had a police scandal on the magnitude of, say, Ramparts in Los Angeles.

COLANTONI: No, no scandals in Canada. You know, you still have the integrity of their police force.

AX: Last year, you made a film in New Orleans called THE CHAPERONE. How was working down there?

COLANTONI: Well, it was really hot and raining, but we didn’t get to the Gulf at all. I just was lucky enough to be invited to play. The lovely Annabeth Gish is in there with me and we had a lot of fun.

AX: You were in THE KENNEDYS miniseries as J. Edgar Hoover and you were a guest on an episode of BONES. Have you done anything else lately we should know about?

COLANTONI: Mostly just being a dad.

AX: Anything else you’d like us to know about FLASHPOINT?

COLANTONI: Just that it’s a wonderful show and we want everybody to see it.