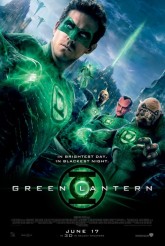 There is great dramatic tension onscreen in GREEN LANTERN. Unfortunately, it has almost nothing to do with the story. Instead, it lies within the intense commitment of stars Ryan Reynolds and Peter Sarsgaard to keeping their characters vital and engaging, and the occasional blast of wonderful dialogue, battling against an uneven plot structure, some videogame-like special effects and a lot of lines that sound like they came straight from a comic book (and not in a good way).

Every time GREEN LANTERN seems like it can be totally written off, Reynolds and/or Sarsgaard swoop in to save the scene. Every time the actors have us ready to forgive all, something takes a nosedive. This creates a lot of suspense, but probably not the kind the filmmakers intended.

Abin Sur lives just long enough to tell the astonished Hal that the ring chose him and the ring never makes a mistake. Hal subsequently tries to figure out how the ring works with the green lantern that is part of its package – so far as we can tell, the lantern powers the ring. Then Hal is hauled across outer space to the planet Oa for some Green Lantern training. Hal learns that the will power of the Lantern and the ring allow the Lanterns to materialize whatever they can envision – nifty!

Corps leader Sinestro (Mark Strong) is worried that Parallax’s yellow power of fear is greater than the Lantern Corps’ power of will, and that perhaps the Corps needs to fight fire with fire, er, fear with fear, though nobody else is sure this is such a good idea. Back on Earth, scientist Hector Hammond (Sarsgaard), examining Abin Sur’s corpse, cuts himself and becomes infected with Parallax’s fear powers, which cause him to slowly mutate and go mad. Hal grapples with ambivalence about whether he’s Green Lantern-worthy and about his relationship with fellow pilot/business administrator/former love interest Carol Ferris (Blake Lively) until it’s time to save the local area from Hector and then the Earth from Parallax. Will Hal step up? Are you kidding?

The screenplay by Greg Berlanti & Michael Green & Marc Guggenheim and Michael Goldenberg, from a story by Berlanti & Green & Guggenheim, based on the DC comics, does have some moments of genius. There is a scene between Hal and Carol that is perhaps the best reaction yet to the established yet absurd convention that a domino mask can conceal someone’s identity. However, in scenes where the dialogue reverts to comic book-ese, it sounds pretty bad, even in the mouth of the mightily striving Strong, to say nothing of the people playing the Guardians.

Then there is the matter of structure, which seems all over the place. Director Martin Campbell knows how to stage action, but the pacing is so haphazard that suspense and momentum never have a chance to build.

The special effects, which have some occasional good moments, all too often look like CGI, which can be a problem even when a film is entirely motion-capture. When it’s contrasted with live-action, as it is here, it’s distracting. Conceptually, the notion that Hal can make real anything he imagines is a lot of fun, but because this is realized onscreen as glowing green CGI, a la first-gen TRON, the results are not quite so impressive. As for the 3D, there is some nice depth of field on the obviously CG shots, but it doesn’t seem to add anything to the live-action sequences.

There are some fun moments in GREEN LANTERN, and Reynolds and Sarsgaard – the latter seems to be just reveling in comic-book villainy, while putting a unique spin on it – are truly worth watching. The movie, however, flickers between being fun and a mess.

Click on link: To check out the WonderCon GREEN LANTERN footage