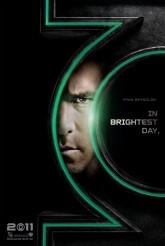 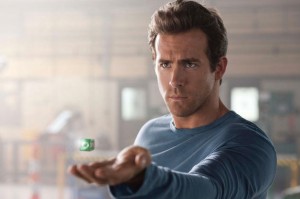 While Ryan Reynolds won’t give up many spoilers for the upcoming action blockbuster GREEN LANTERN (hitting theaters June 17, 2011), he is happy to give some hints.

During WonderCon 2011, Warner Bros showed an extended clip of the movie during the panel including a cool construct of Hal Jordan using a green-powered giant machine gun.

But was that Reynolds favorite Jordan construct?

And what about working with a blue screen and having to imagine these constructs and planets and everything?

“Part of it is make believe and when you are working on a movie such as this, you have to embrace that thing when you are a child, the yearning to pretend,” he says.

So he did his job of pretending or believing in the CGI that would be eventually coming but did Reynolds worry about getting them getting it right?

“Every two seconds of the day,” Reynolds says. “Movies like this are such a leap of faith. I spent six months just staring at a big, blank wall. So I am doing my part of the job. I fulfilled my part of the bargain. So you hope these guys will take care of it, but you never get in a plane without checking out the pilot so I have Martin Campbell there and Warner Bros. does this right.”

An interesting aspect to Reynolds playing this character is that he never really followed or knew much about the comic book.

“I didn’t know much about it. I knew the log line – guy is given a ring by a dying guy and becomes a superhero,” he says. “Geoff Johns [writer for current GREEN LANTERN comic] was great to have around on set because he was the mythology police. He made sure everything was up to snuff because when you have an executive producer that is also a fanboy, if you are a studio that is probably scary as sh**.”

Reynolds also says that Johns was on set a lot to make sure everything stayed within the boundaries of the mythology. So that’s a very good thing for us nerds worried about how it might come off.

CLICK HERE to check out the WonderCon GREEN LANTERN footage