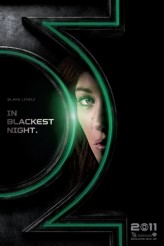 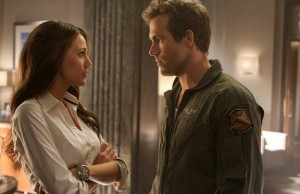 During WonderCon 2011, Blake Lively, who plays Carol Ferris in the upcoming Warner Bros. film GREEN LANTERN (due in theaters on June 17, 2011), took some time to explain why the film  will appeal to more than just men who enjoy action flicks.

“Someone said something about a six-pack and all the women in the audience [viewing the trailer at the WonderCon panel] started screaming and throwing their first borns,” Lively says. “I think it is nice for women to see other women portrayed as a strong and powerful person. You don’t see this is the man, this is the hero and this is the woman he saves. It’s fun to see the powerful women behind the powerful suit, especially when that suit is a superhero.”

But it will appeal to women of all ages and those that work?

“I think that is appealing for women, because women aren’t just at home raising the kids,” Lively says. “They are business owners, they are kicking their men in the butt when their men are being self-involved and impossibly weak. That’s all fun and the costumes are really fun for my character. The world of fantasy is also appealing. It takes place on Earth but we also get to see Oa and that is very appealing.”

There has been much about the training regiment of Lively during the production of LANTERN including she got to spend some time with Cirque du Soleil.

“I wish! I wish half of the things that they write about me are true,” Lively says. “I didn’t work with anyone from Cirque du Soleil, they made our harnesses. My training wasn’t nearly as life-changing as Ryan [Reynolds] was. I trained for months for probably three seconds you’ll see on film. I trained on the Matrix-rig because it was invented for the MATRIX film. It is a gyroscopic waistbelt and it is the best workout. I was shooting in New Orleans and it has some of the best food on Earth and I had two kitchens and I love cook and I love to eat. So training became something where I had to do it otherwise I may have turned into Violet Beauregard instead of Carol Ferris.”

CLICK HERE to check out the WonderCon GREEN LANTERN footage