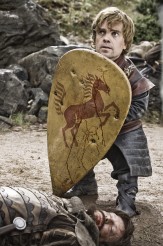 The actor talks working in Westeros and fraught family relationships 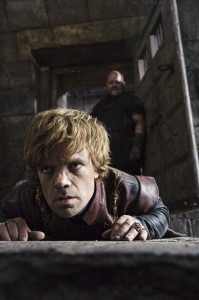 In HBO’s eagerly anticipated new series GAME OF THRONES (which debuts tonight), based on George R.R. Martin’s novels about the mythical land of Westeros, many clans vie for power in a medieval setting – the Lannister family is among the most dominant forces in the story. Peter Dinklage plays Tyrion Lannister, one of that bloodline’s complex scions. Dinklage talks with us about his adventures in Martin’s fantastical yet oh-so-human terrain.

ASSIGNMENT X: Were you a fan of George R.R. Martin’s books before you become involved?

PETER DINKLAGE: Yeah. I read the first one and I loved it, and that was one of the reasons I signed on to this show.

AX: Did it occur to you that one of the characters was someone you’d like to play?

AX: Can you talk about your character, Tyrion Lannister?

DINKLAGE: My character is a great character. He’s very complicated and has some dark secrets and a lot to reveal. He’s in the Lannister family. The show deals with a couple of different families. Some get along, some don’t and I’m a Lannister, so they’re sort of the opposing family that married into the royalty and all of that. He comes from great privilege, but also great pain, so he’s got a love/hate relationship with his family. Charles Dance plays my father, he’s an incredible actor – it all stems from him and the death of our mother. I don’t want to give too much away, but there are reasons for the complicated relationships within the family. Good reasons.

AX: What are Tyrion’s relationships like with his siblings?

DINKLAGE: They’re very complicated relationships. He loves his brother [played by Nicolaj Coster-Waldau] very much. His sister [Lena Headey], on the other hand, she’s a difficult one, but so is my character. Everybody has their skeletons in the closet [laughs]. What’s the quote – “All happy families are alike, all unhappy families are [unhappy in their own way].” Show me a family that gets along. Nicolaj and Lena are good friends [in real life]. I don’t want to give too much away storywise, but I’m looking forward to the seasons down the road, because I’ll have more stuff with them. Lena is a really dear friend, so I look forward to working with her.

AX: Does this role call for sword-fighting, horse-riding …?

DINKLAGE: Mm-hmm. Not so much the sword-fighting, but plenty of horse-riding. He’s a character that doesn’t really use his body strength, he uses his mind, so he’s very smart.

AX: In the book, Tyrion does do some battling …

DINKLAGE: Oh, yeah, he gets his hands dirty.

AX: Does this call for you to do more physical action than you usually do?

DINKLAGE: No, not so far. I’ve done a lot of that stuff, so this is not as much as some of the stuff I’ve done, but it’s okay.

AX: Did you discuss with the producers and directors what sort of accent you use for the role, as you’re not speaking with your normal American accent?

DINKLAGE: Yes. It was established very early on that the Lannister family is more proper, British. Sean Bean and those guys, that family, the Starks, they’re from the North. So it kind of worked out, because they use a Northern accent, which is very distinct when you’re over there [in the UK]. American audiences will pick up on it once they start hearing the differences.

AX: The Starks are more Yorkshire and the Lannisters are more received pronunciation?

DINKLAGE: Exactly. The RP and the Yorkshire.

AX: Had you worked in Northern Ireland before filming GAME OF THRONES there?

DINKLAGE: I’ve never worked in Northern Ireland before. I’ve worked in the islands quite a bit – the Isle of Man, England, south of Ireland, Scotland – everywhere else but Northern Ireland, actually. [Northern Ireland] has a very pleasant quality. I really enjoyed myself over there. It’s beautiful. You should go.

AX: You’ve worked a lot in Britain. Is that just where the good roles have come up for you, or is there something you particularly like about working in the UK?

DINKLAGE: I don’t want to get into comparing the two [UK and US], but I think it just happens to have happened over the last four or five years I’ve done more movies and such that take place over there. And I do enjoy working over there a lot. I guess I have been working over there more than over here [in the U.S.]. I don’t know what that’s about. The beer is better [laughs]. I don’t know have an answer to why I have been, but I am lucky to have been.

DINKLAGE: As a regular? No. I did a show five years ago, THRESHOLD, which was on CBS – we lasted twelve episodes. It was a year that aliens were invading the world [on TV]. There were three of them [alien-invasion series], and we all got knocked off, one at a time.

AX: Do you like playing one character over a long period of time?

DINKLAGE: Coming out to theatres? A couple things. Some small low-budget stuff. There’s a movie called KNIGHTS OF BADASSDOM, which is about live-action role-players, which is a really funny horror movie.