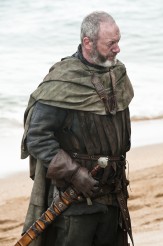 Another complex, intricate episode but with strangely little violence for this series 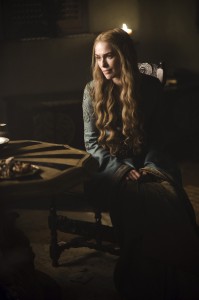 GAME OF THRONES usually has a lot of fighting and sex. There’s plenty of the latter in “The Night Lands” but, curiously for an episode referring to the afterlife, there’s not much blood this time around. The plot moves forward, but the pace is a little more measured this time around.

At King’s Landing, Tyrion (Peter Dinklage) asserts his authority as Hand of the King, telling Lord Varys (Conleth Hill) that he won’t stand for being blackmailed, having erstwhile Captain of the Watch Lord Janos (Dominic Carter) banished outright and installing his friend Bronn (Jerome Flynn) in Janos’ place. Queen Regent Cersei (Lena Headey) is furious with her little brother. Tyrion discovers that Cersei’s son Joffrey (Jack Gleeson), rather than Cersei herself, gave the order for the late king’s out-of-wedlock children to be murdered. Tyrion now believes (correctly) that sister Cersei and her twin brother Jaime (Nikolaj Coster-Waldau) have been having an affair that produced all of Cersei’s children, which means that Joffrey is not the rightful heir to the throne. If Joffrey ordered the killings, this means he believes it, too.

In the Red Waste, Daenerys (Emilia Clarke) suffers a further setback when a riderless horse returns to camp, bearing the head of loyal warrior Rakharo. Daenerys swears vengeance on the other Dothraki leaders.

In the Iron Islands, Theon Greyjoy (Alfie Allen), sole living son of Lord Balon Greyjoy (Patrick Malahide), returns to see his father. Balon is unwelcoming, angry at Theon for having lived with the Starks, as they fought against and killed Theon’s brothers. Theon brings a request from Robb Stark for Balon to send ships to wrest the throne from Joffrey, but Balon would rather war against Robb; Balon trusts his daughter Yara (Gemma Whelan) to command troops and ships more than he trusts Theon.

A contingent of King’s Landing guards set upon the young men and boys heading toward the Wall, but the recruiter, Yoren (Francis Magee), chases them away. Arya (Maisie Williams) is afraid they are there for her, but they are seeking one of Robert Baratheon’s bastards, Gendry (Joe Dempsie), who is also part of the group. Gendry reveals to Arya that he knows she’s actually female – she’s disguised as a boy – and Arya reveals that she’s actually the daughter of the late Eddard Stark.

Stannis Baratheon (Stephen Dillane), who is next in line for the throne and about to wage war for it, is seduced by his prophetess Melisandre (Carice Van Houten), who promises him a son. Stannis’ loyal follower Davos Seaworth (Liam Cunningham) gets the pirate captain Salladhor Saan (Lucian Msamati) to agree to fight alongside Stannis’ small army for a share of the spoils.

Beyond the Wall, Jon Snow (Kit Harington) and the Night’s Watch are still taking shelter with the Wildling Craster (Robert Pugh), who forces all of his daughters to bear his children. No one knows what he does with the sons. Craster is also notable for being the only Wildling in miles to not have abandoned his homestead. One of Craster’s pregnant daughters, Gilly (Hannah Murray), begs Jon’s friend Sam (John Bradley) to help her escape the compound. Jon says no, but he is curious enough by Gilly’s refusal to say what her father Craster does with his male infants. When Jon hears an infant crying and sees Craster carrying the child into the woods at night, he follows. The infant is taken by a strange figure – and Craster comes up behind Jon and knocks him unconscious.

By the end of almost any episode of GAME OF THRONES, one marvels at how novelist George R.R. Martin and show runners David Benioff and D.B. Weiss manage to keep all of this straight. “The Night Lands” is no exception. Most of it is intriguing on its own. We are willing to follow Dinklage’s Tyrion anywhere, because it’s a riveting performance, his dialogue is never less than sterling and his confrontations always push the plot forward.

The scenes with Arya and the band headed for the Wall have inherent tension (and one great joke) because of the jeopardy to a character we like who is also a child. Likewise, the scenes at Craster’s encampment have us wondering what’s going on here and whether Jon will man up and help Gilly. Well, actually, most viewers are probably hoping that Craster will get his incestuous, rapacious ass kicked, but in any case, it’s a suspenseful situation.

The scenes with Daenerys, while doubtless needed to move that side of the tale along, have a somewhat “meanwhile back at the camp” feel here. Theon, meanwhile, is not especially compelling in himself, so while we understand that his visit spurs his father to enter the fray (and presumably heap more problems upon the Starks), the scenes are mainly dynamic because of the bitter fury Malahide puts into his portrayal of the disapproving Balon.

The scene with Stannis and Melisandre in dramatic terms is nothing we haven’t seen before, but director Alan Taylor makes it look like a Renaissance painting – his use of light and color here is jaw-droppingly beautiful.

As usual, there is so much going on here that a first viewing is practically overwhelming, but it’s worth the attention it requires.