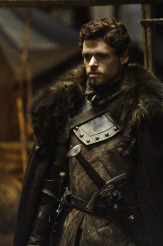 The second season gets off to a beautiful, bloody and eventful start 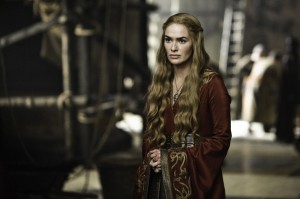 Season 2 of GAME OF THRONES hits the ground running with “The North Remembers.” A quick and efficient recap reminds us that the vast Kingdom of Westeros threatening to rip itself apart after the death of King Robert Baratheon (Mark Addy). Robert’s extraordinarily cruel young son Joffrey (Jack Gleeson) has ascended to the throne. Joffrey has executed Robert’s loyal friend Ned Stark (Sean Bean), who had discovered that Joffrey and his royal siblings were not really Baratheons at all, but rather the children of Queen Cersei (Lena Headey) and her brother Sir Jaime Lannister (Nicolaj Coster-Waldau).

As “The North Remembers” begins, Sansa Stark (Sophie Turner) is miserable as the fiancée of appalling young Joffrey. Still, Sansa is able to sway him to mercy in the matter of a drunken knight. Then Tyrion (Peter Dinklage) shows up, to the consternation of his sister, Joffrey’s mother Cersei. Tywin Lannister (Charles Dance) has sent son Tyrion to serve in Tywin’s stead as Hand of the King. Tyrion doesn’t think much of Cersei’s lack of ability to control Joffrey, especially Joffrey’s execution of Ned, which has caused the Stark family and most of the northern end of the kingdom to rise up in revolt.

At the Stark lands in Winterfell, young Bran Stark (Isaac Hempstead-Wright) is now the lord, as his mother Catelyn (Michelle Fairley) and eldest brother Robb (Richard Madden) are both off to war. Bran, like everyone else in Westeros and beyond, ponders the meaning of a red-trailing comet that has appeared in the daylight sky.

Daenerys Targaryen (Emilia Clarke), across the Narrow Sea, seeks food and shelter for her Dothraki followers at the same time she nurtures the three baby dragons she hatched.

Jon Snow (Kit Harington), now steward to the Commander of the Night Watch, has followed his company north of the Wall. It is rumored that a ruler here is gathering an army to march south and take the crown.

Stannis Baratheon (Stephen Dillane), brother of the late King Robert, knows that Cersei’s children, including King Joffrey, are not really Baratheons. Urged on by his monotheistic priestess Melisandre (Carice van Houten), Stannis plans to invade the capital city of King’s Landing and take the throne.

At the same time, Catelyn and Robb plan to support Stannis’ other brother Renly Baratheon (Gethin Anthony), in the hopes that he will take the south and leave Robb to rule in the north. They also hope that Renly will help them retrieve Sansa and other Stark daughter Arya (Maisie Williams). They currently hold Jaime as hostage and would like to be able to trade him for Sansa and Arya.

What Catelyn and Robb don’t know is that Arya fled the capital after her father’s death and is currently disguised as a boy, headed north toward the Wall with a group of other youths.

Joffrey, who believes the (true) gossip about his real parentage, has his men go on a rampage, killing infants and children who may have been fathered by Robert Baratheon. One of these is a boy traveling with Arya.

That’s the bare bones of what’s going on in this wildly eventful installment, which goes from the burning plains where Daenerys wanders to the freezing north and everything in between. Highlights include confrontations between Cersei and Joffrey, Cersei and Lord Baelish (Aiden Gillen), the inclusion of a full-grown dire wolf in an argument and just about every instant Dinklage is on screen as the wry, resigned master of perspective Tyrion.

GAME OF THRONES is ever astonishing in its ability to put forth enormous, multifaceted chunks of story and keep them comprehensible, even as they fly at us with the speed and force of arrows. It also remains utterly beautiful and fully physically realized, a world we feel we can walk into and touch as surely as we might walk the streets of our neighborhoods.

With this many players in the game (the second book in George R.R. Martin’s ongoing of A SONG OF ICE AND FIRE novels is called A CLASH OF KINGS), there’s no predicting who will get the throne, though it seems likely Joffrey won’t hold it much longer. Gleeson deserves a lot of credit for letting us at least see Joffrey’s perspective, horrifying though his character is. Cersei comes off as reasonably sympathetic under the circumstances, thanks to Headey’s aware, alert performance and we feel for all of the Stark family.

But what we feel most is simply hunger for more story. Next week won’t come soon enough.