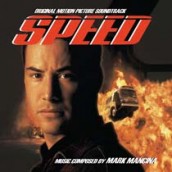 Few soundtrack labels have rejoiced in putting out the rhythmically trend-setting scores of the 80’s and 90’s like La La Land Records, their explosive beats including the killer calypso groove of James Horner’s COMMANDO, Hans Zimmer’s twangily propulsive BROKEN ARROW, Mark Mancina’s Afro-grooves in BAD BOYS and Michael Kamen’s orchestrally operatic ho ho ho’s for DIE HARD. If that soundtrack stands as the seminal action score of the 80’s, then it’s fitting that La La has marked their 200th release with the next decade’s landmark work of popcorn aggressiveness for a full-on edition of Mancina’s SPEED.

Why should you buy it?: Where DIE HARD just took place in one building, SPEED had the high-concept of thrusting its LA thrill rides from an out-of-control elevator to a hell-bent bus and a barreling subway. Though effectively given a pop quizzing human dimension in Joss Whedon’s script, what truly set SPEED‘s sound apart was the pure, mechanized rhythms that Mancina developed for the movie’s theme of transportation run amuck, a chase now given a whole new sonic dimension upon hearing the complete score’s dramatic arch. At first stripping out any feeling of organic emotion to convey a claustrophobic, bomb-strapped elevator, Mancina’s creatively metallic collection of scraping and pounding “industrial” samples become far more emotional when Keanu’s cop boards the bus, bringing with him an orchestra to fully join in with the iron and electronic samples. Topped with a memorably heroic theme, Mancina’s score conveys the daredevil thrill of desperation. SPEED‘s non-stop, thematic succession of sinister, mad bomber ambiences and rhythmic, cliffhanging beds became the new, high-tech sound that police with an attitude would abide by. And while Mancina would have fun giving his beats an even longer Caribbean workout for SPEED 2 (also on La La Land), there’s no iconic match for the grinding, musical explosion heard ‘round the multiplex, let alone Hollywood, especially in all of its full-throttle glory.

What SPEED album would be complete without the Billy Idol title song? As one of the labels that tries to get every scrap of source and rock on their albums, La La Land gets extra points for finally including one of the rebel-yelling rocker’s best tunes on the album. Top it with John Takis’ justifiably enthusiastic liner notes, and this SPEED gets every question right when it comes to what makes up one of action cinema’s most dynamic scores.