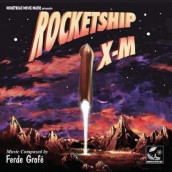 A classic sci-fi movie lands on Mars, and discovers an unsung composer in the bargain

Intrepid Earth beings would get theirs upon visiting another planet in 1950’s ROCKETSHIP X-M. Along with DESTINATION MOON, ROCKETSHIP was one of the pioneering sci-fi movies, whose phallic spacecraft ended up landing on a mutant-infested Mars, as opposed to the dusty Moon- a predicament that not even manly X-M captain Lloyd Bridges could beat.

The real discovery of this space voyage is its rousing score by Ferde Grofe. With precious few composing credits to his name (Grofe’s biggest hit would be the song “Wonderful One”), ROCKETSHIP X-M reveals a soundscape that’s surprisingly beautiful for the genre scores of the period. Having written a classical suite for The Grand Canyon, Grofe imagines Mars with the same kind of vast, romantic poetry (with even the playful addition of “Jingle Bells”), at least until Martian mutants imposingly show up.

Grofe’s music achieves that rare genre grail of having “a sense of wonder” bringing to mind John Williams’ work for LOST IN SPACE as Mars is unraveled with awe-inspiring themes. The real deal Theremin is along for the ride, with its airwaves milked for all of their weird, pulsating exoticism here. It just might be the instrument’s most dexterous use outside of (and before) “The Day the Earth Stood Still,” especially when combined with an organ at its most unearthly reaches. There’s a soaring, sci-fi magic that fills ROCKETSHIP X-M, even during the earliest days of the movie music space program. It figures that MMM would be the label to dust off this striking score, with Vincent Di Fate providing enticingly stellar cover art.