The question of who is a better trainer for Scott rears its head in a fun, light fill-in episode before some major wolf badass-ness starts happening 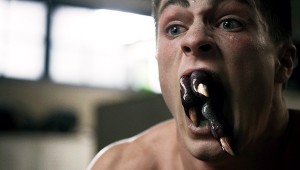 It’s clear that “Heart Monitor”, the latest episode of MTV’s great new genre series TEEN WOLF is just the set-up for some major badass-ness going into next week.

And it’s about time.

With the full moon on the horizon, and the Alpha Wolf wanting Scott (Tyler Posey) to become part of his pack, time is of essence for Scott to understand and control being a werewolf.

On one hand, you have Derek (Tyler Hoechlin) doing his brooding wolf thing and not revealing very much to Scott even though he claims he wants to help him control his wolf side. On the other end is Scott’s best friend Stiles (Dylan O’Brien) who agrees to be his Yoda and train him in some more unorthodox ways.

Stile believes that by using a heart monitor, he can keep track of Scott’s heartbeat and if Scott can control his heartbeat when that angry wolfy adrenaline rush starts to appear, then it may be the key for him to not slaughter innocent people (like his friends).

Something else comes out of this little test – Allison (Crystal Reed) is actually a calming tool for Scott and brings him back from his wolf state. So, Allison is in fact a good thing for him.

There’s also the further evolution of Jackson (Colton Haynes) – into what, is still the big question. He was jabbed by Derek’s fingernails, and is now looking all pale and having bizzarro dream of wolf hands coming out of his mouth, but is he indeed cursed with the wolf gene, or just ill from by touched by a wolf?

Plus, Allison learns about her heritage – that she comes from a long-line of wolf hunters.

The episode ends with Scott, Derek and Stiles kidnapping Scott’s veterinarian boss (who they believe is either the Alpha or helping the Alpha). When Scott gives a wolf call to get the Alpha to show its ugly face, Derek is stabbed (perhaps fatally) while Stiles and Scott head for the school.

This episode is directed with a sure-hand by Toby Wilkins bringing some great horror to mix as well as an ample amount of cheeky dark humor. O’Brien is really becoming the solid comic relief of the show and brings so much to the table every time he’s on screen.

I also love the dark detour Jackson is heading in as he slowly starts to suspect something supernatural is going on at the school. His descent into illness, madness or perhaps even lycanthropy is definitely allowing this otherwise stock jock role to become one of the series’ more interesting characters.

I’m also going to stand by my prediction that Lydia (Holland Roden) is the Alpha Wolf. There were a few signs this episode that she may not be who she says she is. That said, another interesting suspect for Alpha Wolf could be Allison’s daddy, who also happens to be a Hunter. Might be an interesting twist, but I doubt it.

From the writing to the direction, TEEN WOLF continually impresses with its attempts to break out of the normal genre TV mold and present something a little hipper, a little more edgy and a little less cookie cutter.

Add to that, the promos for next week, for a change, were actually quite good (was MTV listening to my complaints last week?). The previews instantly made me want to come back with their tease of high school mayhem at the school late at night. I can’t wait (and I rarely say that anymore when I watch any TV show I’m reviewing).