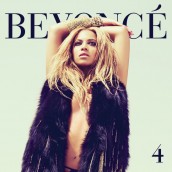 A strong new disc from perhaps the most accessible Diva currently in pop, even if she doesn’t break any new ground

If I had my choice of soaking in a new Elvis Costello album or checking out the new Beyonce release 4, I would probably go for Costello.

However, considering there isn’t a new Costello release, there’s no harm in evaluating Beyonce’s latest. To be honest, I thought her last release, I AM … SASHA FIERCE, was an impressive, groundbreaking album for the artist. She experimented with her sound and conjured up some very powerful ballads that transcended the Diva genre.

With 4 (her fourth solo release), she plays it somewhat safe. There are ballads that sound like “Boy,” there’s an attempt to recapture the wholly original vibe of “Single Ladies”, but nothing really stands out as earth-shattering new.

That said, as far as Divas go, I’ll take Beyonce over Christina Aguilera and Celine Dion. Her voice is more accessible and she has a playfulness that is seriously lacking from Aguilera and Dion.

As for 4, the disc kicks off with the strong ballad “Best Thing I Never Had” and then gets into aggressive mode with the catchy “Countdown” with its propulsive toe-tapping beats.

With “Countdown,” “End of Time” and “Run the World (Girls)”, Beyonce is striving for female empowering anthems – and it works for the most part. The songs are well-produced and there’s some nice brass work on “End of Time” that has a military-like beat driving it forward.

However, Beyonce’s ballads are just as strong and 4 has a bunch of them.

“I Miss You” is the better produced of the three, though it has the annoying slang phrase “Wid You” that Beyonce is forced to sing (it’s cringe-worthy). I get she’s trying to appeal hip and accessible, but it’s like a big bloody stump dangling in front of a very pretty ballad. Bad choice.

This leaves the solidly penned Dianne Warren song  “I Was Here” as being the victor in the ballad rounds on this disc. A really powerful song that accelerates to a big Diva-like crescendo.

“Love on Top” is an old-school jam, a bubbly slice of retro-Motown soul. If anything stands out, it’s this track which reaches for a different vibe than Beyonce has captured in the past. It’s a really solid track that could turn into an exceptional single if the label takes a chance on releasing it among the home-run ballads that pepper this release.

“Party” is a throwaway track featuring an uninspired rap by Outkast’s Andre 3000 – not very interesting and it kind of throws off the momentum of the first half of the disc. Same goes with “Rather Die Young”, another bland, uninspired ballad. This has a retro-feel too (more 1980s than anything) and even though it gives Beyonce a chance for her pipes to get moving, the song is ultimately a big mess.

The album concludes with two great ballads. “Start Over” is the kind of song that will end up being sang ad infinitum on AMERICAN IDOL for years to come. This is the kind of music Beyonce excels in – taking a pop contentions and wrapping her soulful smooth R&B voice around the grooves and beats.

That said, “1 1” is another potential AMERICAN IDOL run-it-into-the-groun song that I’m sure will get ample butchering in Season 11. “1 1” is a exceptional and a nice conclusion to this up and down disc – especially with its spare guitar and strings which keeps Beyonce’s vocals at the forefront.

Overall, 4 is a good album. There are enough songs to make this worth several spins, and there are more than enough potential singles to keep this on the charts for weeks to come.

As I said, Beyonce is a very rare Diva bird. She’s not as pretentious as her contemporaries, her singing style is powerful, but restrained when necessary and for the most part, she has good taste in songs. She may not have supplanted the heights of I AM … SASHA FIERCE, but how could anyone?