An episode with a great premise, but slightly rushed execution 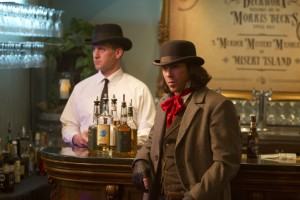 The LEVERAGE episode “The 10 Li’l Grifters Job” feels like it wanted to be a telefilm. It certainly has all the elements – an Agatha Christie set-up, schemes within schemes and Nate (Timothy Hutton) having a whole new worry about what his friends think of him. However, in a one-hour time slot (with plenty of commercials), there simply isn’t time to do justice to what’s here.

In “Grifters,” Nate and the team take on one Mr. Beck (William Russ), a rich contractor whose shoddy work has caused injury and death. When they deduce that Beck’s blueprints are hidden in his island mansion, and that he’s holding a themed masquerade/murder mystery party there, Nate and the team arrange to be invited. Parker (Beth Riesgraf) and Hardison (Aldis Hodge) search for the goods while dealing with a low-tech environment that doesn’t allow them to ply their usual skills.

Meanwhile, Nate, Sophie (Gina Bellman) and Eliot (Christian Kane) are dressed for the party as various characters out of detective literature. Nate is Ellery Queen (in a nice homage to Hutton’s father, the late actor Jim Hutton, who played the role in the ‘70s TV series) and Sophie is dressed as Irene Adler, the femme fatale from Sherlock Holmes. 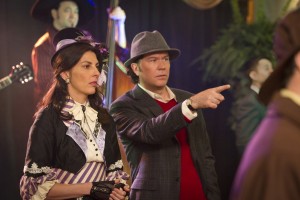 However, somebody kills Beck for real by snapping his neck and tossing him off a balcony into the throng as the lights flicker and lightning flashes – with Nate standing right behind him. Sophie swings into action, claiming that she and Nate are the actual planners of the game and that Beck isn’t really dead, but simply centering the mystery around himself. The pressure is on to find the real culprit before Nate is arrested as the obvious suspect. The real culprit turns out to be the fellow posing as real law enforcement at the party. Hardison and Parker find the blueprints, Nate is exonerated and everything turns out rosy – except that Nate is highly disturbed that for a moment, each member of his team wondered if Nate was in fact the killer.

The emotional emphasis placed on Nate’s hurt feelings is out of proportion to the crew’s reactions to the possibility that Nate killed Beck. This in turn seems unlikely, given that Beck is hardly the most egregiously awful person the team has taken down, and he has no personal history with Nate at all. There’s no time to establish any sense that Nate is in a particularly grim mood about the villains of the world, and having Beck dead in the middle of the scam doesn’t even help, so it doesn’t really track that our folks are suddenly suspecting Nate of foul play. Rather than being hurt, it would make more sense for Nate to be bewildered by all of this jumping to conclusions, however briefly.

Then there’s the scam. It’s great to see Sophie do one of her instant switch-ups and take over the whole party, but her pseudonym (which she uses from the beginning of the scam, not just at the soiree) is poorly chosen. Nate’s alias of Mr. Gordon employs a common enough surname, but when Sophie calls herself Yma Sumac, a good number of people in the audience will recognize the name as that of an offbeat South American singer of yore. When another character deduces that Sophie is an impostor, based on her fake moniker, we feel like Sophie walked into that one.

There is fun to be had at the costume/mystery party and with Hardison griping about the lack of anything to hack, and it’s agreeable as is usual on LEVERAGE to watch the complications pile up, but this is a case where the whole feels like less than the sum of its parts.