This is one hell of a season finale with deaths, rebirths and loads of suspense and humor 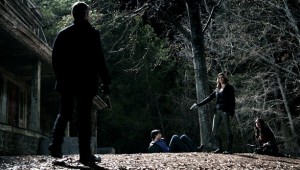 When TEEN WOLF began this year on MTV, there were many naysayers who were skeptical that a 1980s teen comedy featuring Michael J. Fox as basketball-playing werewolf could be turned into a scary, darkly humored television series.

AX knew better, having seen the pilot and the potential the series had, and now as the show concludes its first season, it stands tall as one of TV’s best new genre TV series.

“Code Breaker” is an excellent wrap-up episode that provides closure, but also tosses in a whole slew of new mini-cliffhangers to keep fans anxiously awaiting its return in 2012.

Just like last week, the finale chews through a ton of story at an expedited pace (you could have taken this one hour and made it two, and it still would have been just as good).

The big revelation is Allison (Crystal Reed) learning that Scott (Tyler Posey) is a werewolf. Now she has to decide if she wants to kiss him or kill him.

Meanwhile, Big bad Alpha werewolf Peter Hale (Ian Bohen) uses Stiles (Dylan O’Brien) to help him find Derek and Scott. He also offers Stiles the chance to become a werewolf too, but he declines, even though Peter senses he wants to be turned.

Lydia (Holland Roden) has been bitten by Peter and taken to the hospital – the bite has caused an allergic reaction, but she’s still alive. However, by episode’s end, it’s clear she’s not a werewolf, but perhaps something else entirely different (let’s hope she’s not a vampire).

I don’t want to talk too much about the surprises the conclusion holds, but there is an Alpha werewolf showdown between just about every important character on the show and it’s a great pay-off. 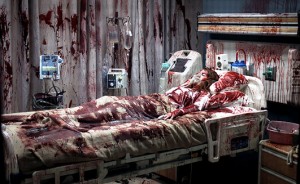 There’s also a whole bunch of mini-cliffhangers at the end that gives a taste of where Season 2 may be going. With all the cool little storylines layered throughout Season 1, the finale certainly bears the fruit of those major seeding tools.

There’s a bunch of talk about “rules” and “code” both with the wolves and the Hunters. We do learn that the Hunters don’t kill wolves that they haven’t been confirmed to have killed actual humans (which means Scott is safe for the time being). And with wolves, if you’re bitten the end result can go either way. Either you die, or survive and if you survive, that’s how you become a wolf. There’s also some interesting info that female wolves are pretty badass.

There’s some murkiness as how to stop Scott’s lycanthropy and the werewolf on werewolf fight scenes are still a little splotchy at times, but none of this detracts from the show’s wildly satisfying charms. It’s a series that provides tons of twists and turns, plus an ample amount of gore.

It’s going to be a long wait for the next season of TEEN WOLF, but hopefully by then, an even bigger audience will have discovered it and will have pushed it up even on the pedestal as the rightful heir to the BUFFY THE VAMPIRE SLAYER teen angst monster TV show throne.