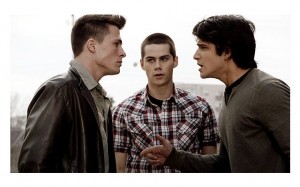 MTV’s TEEN WOLF, airing Mondays at 10 PM, is a much more dangerous, sexy and scary take on its subject matter than its title (borrowed from an 1980s Michael J. Fox vehicle) might suggest. Tyler Posey plays Scott McCall, a small-town high school student whose life is turned upside-down in ways both wonderful and terrifying when he is bitten by a strange creature and subsequently becomes a werewolf, with all the strength, heightened senses and moon-influenced bloodlust that comes with the curse.

TEEN WOLF has become extremely popular in its first season and is already renewed for a second. Part of its success can be credited to Posey, who plays Scott with an innocence, sincerity and desperation that makes us identify entirely with his plight.

At a party thrown by MTV for the Television Critics Association, Posey is hanging out with friends, including his TEEN WOLF cast mates Crystal Reed (who plays love interest and werewolf hunter’s daughter Allison Argent) and Dylan O’Brien (Scott’s best friend Stiles). They are all doing some people watching – “There are a bunch of famous people here,” Posey notes – but he agreeably takes some time to talk about his series.

ASSIGNMENT X: When you went in to audition for TEEN WOLF, did they tell you what they were looking for?

TYLER POSEY: The script, the sides [pages for the audition] and all the stuff that I read told me what they were looking for, and I just went in there with my interpretation of what I thought they wanted and I guess I did pretty good [laughs], because I got it, and now I’m here.

AX: And were you a fan of the horror genre before you got involved in the show?

POSEY: Yeah, I do like that genre. It’s interesting and there are a lot of really cool movies. I mean, it’s not my favorite genre, but I like it. 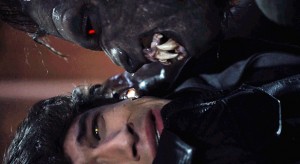 AX: Do you have a favorite genre?

AX: Where do you shoot TEEN WOLF?

POSEY: For TEEN WOLF, we shot in Atlanta, Georgia. It was really cold. It was winter. It was fun. I really like that place. If we go back, that’s cool, but we might shoot here in L.A., but I really do like Atlanta. A lot of cool people there.

AX: So you were working up the road from the production team on VAMPIRE DIARIES.

POSEY: Yeah, they were right in our building.

AX: Are there any aspects of playing Scott that came easier or were more challenging than other aspects?

AX: How is it working in the werewolf prosthetic makeup when Scott transforms?

POSEY: I love it. I love that it’s not extreme, because we’re trying to do a werewolf that looks not as furbally-ish as the first one. I like the way it looks.

AX: Is it easy to express emotion in the makeup?

POSEY: Oh, yeah, it’s very flexible. Most of the time when I’m a werewolf, I’m very mean, but definitely it is an emotional [expressive makeup]. 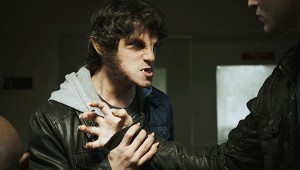 AX: With the stunts that they let you do, as opposed to the ones that require your stunt double, are these things that you knew how to do before you got the part, or did they have to train you for it?

POSEY: I’m athletic. Some of the stuff they needed to train me to do, but most of it was just easy-to-grasp stuff.

AX: Scott plays lacrosse. Do you understand how lacrosse is played?

POSEY: I definitely kind of understand how lacrosse is played. It seems pretty basic to me. I like it.

AX: Well, TEEN WOLF has certainly made it more popular than it was.

AX: How was working with TEEN WOLF producer/director Russell Mulcahy?

POSEY: It was awesome. I love that dude. He’s a really good director and one of the nicest people I’ve ever met. We’re now really good friends and he’s going to be directing part of Season Two also, so I’m really excited to work with him again.

AX: From where the show started, has it gone where you expected it would go, or has it surprised you?

AX: How was going to Comic-Con for the TEEN WOLF panel this year?

POSEY: We did it last year also, but it was way crazier this year, because everyone knew who we were. And there were all these screaming girls – it was insane.

POSEY: I have a film I’m doing now called WHITE FROG and then I’ve got a film after that called TACO SHOP.

AX: Anything else you’d like to say about TEEN WOLF?