An actually creepy episode with a respectably intimidating werewolf 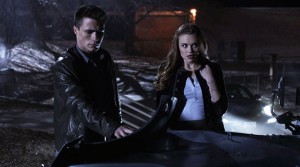 Now this is more like it. TEEN WOLF, after splashing around in the teen angst drama pool for awhile, has started to get its scary on. In “Night School,” the show goes for its most horror movie-like episode yet, with lots of good atmospheric tension and upping the stakes for our beleaguered, newly lycanthropic hero Scott (Tyler Posey).

Beginning the instant the previous episode, “Heart Monitor,” ended, “Fight School” picks up with Scott and best friend Stiles (Dylan O’Brien) watching in horror as an alpha werewolf apparently kills Scott’s werewolf mentor Derek (Tyler Hoechlin). The two boys seek shelter inside their high school, where the werewolf pursues them. Scott has his phone off, but his girlfriend Allison (Crystal Reed) is lured to the site by a text purporting to be from him, and frenemies Jackson (Colton Haynes) and Lydia (Holland Roden) are drawn into the situation as well. E

Eventually, all five are trapped together as the alpha werewolf stalks them. Scott and Stiles both believe the alpha is really Scott’s veterinarian boss, but they have no proof. Scott, not knowing what to tell the others, pinpoints Derek as a serial killer who is after all of them. Stiles notices the marks on the back of Jackson’s neck as Jackson has a violent (albeit unknowing) reaction to the alpha’s proximity and Lydia also exhibits some odd behavior. Having been told previously by Derek that the alpha wants Scott as part of his pack, Scott goes off alone to face the beast. The alpha werewolf supernaturally forces Scott to transform. This wears off when the police arrive, but Scott confesses to Stiles that he was filled with an urge to kill everyone. Allison, who can tell Scott is lying to her (though not about what), breaks up with him, and Scott wonders if he should end his friendship with Stiles as well in order to protect his friend.

There is a lot of strong emotional material here, including Scott’s interactions with both best friend Stiles and girlfriend Allison, Allison’s tentative warming up to Jackson, the budding hostility between Jackson and Lydia and Stiles’ reluctance to endanger his police chief father (Linden Ashby) by bringing him into the situation. It would have been nice to get a slightly better idea of how Scott feels about Derek’s apparent death, but since Scott doesn’t know himself, it’s fair that we don’t know either. (As to whether or not Derek is really dead, the body vanishes and what happens to him wouldn’t traditionally kill a werewolf, though it would be lethal for a regular human.)

It’s very satisfying to see director Tim Andrew and writer Jeff Vlaming fully embracing the horror underpinnings of the material. More than any TEEN WOLF episode thus far, “Fight School” makes the most of the genre, with shots of long empty hallways, claws sliding around the edges of walls and similarly eerie visuals that generate some actual chills.

Kudos are also due to the werewolf sfx crew. While the look of wolfed-up Scott is still disappointing, the alpha werewolf is a great monstrous beast, akin to the Lycans of the UNDERWORLD movies in size and menace.

Between giving us moments of good real fright and increasing the physical and emotional jeopardy for all of the characters, “Fight School” wins its round.

Click on link: for AX’s review of TEEN WOLF – “Lunatic”