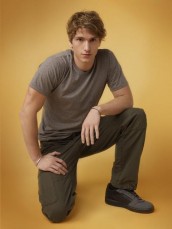 Are you on Team Alk? We give you reasons why you should be for ABC Family's latest star 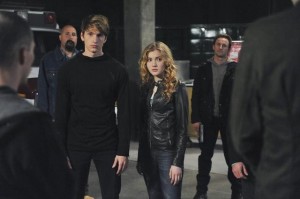 THE NINE LIVES OF CHLOE KING is a new genre series on ABC Family. The show has been compared to TV that has come before it such as BUFFY THE VAMPIRE SLAYER or THE VAMPIRE DIARES. Chloe King (Skyle Samuels) is a girl who finds out on her 16th birthday that she’s not entirely human, and is actually part of a race of catlike people called the My. One of Chloe’s defenders is her classmate Alk Petrov (Benjamin Stone) who is also a My, and has the same claws and superhuman abilities as Chloe.

ASSIGNMENT X had the chance to speak with Benjamin Stone during a recent set visit to CHLOE KING, and got the ins and outs of working on a genre show, and found out the actor’s take on where he thinks his character’s journey should take him.

On being able to keep his natural British accent….
“Originally I wasn’t [speaking in my normal accent],” explains Stone. “Originally I was cast with a different accent. I got cast as a Ukraine-American, and we changed it. I got a phone call from the producers at eight AM one morning telling me they wanted me to use my normal accent. I was actually really bummed out because I was doing something different. Now I’m completely glad that they decided to use my normal accent, because it would be really difficult to change in and out of. Things are so quick in scenes that it’s hard enough to focus on what’s going on without worrying about changing my accent. It changed the character, because the way it was written originally was they wanted a ‘sexy Ukrainian accent’ and that’s an oxymoron, it doesn’t exist. [Laughs]Everyone that was auditioning sounded like a vampire.”

On where Alk and Chloe’s relationship is going this season…
“Of course she should end up with Alk,” laughs Stone. “Where that really started was the third episode and that was my favorite episode so far, but then each episode keeps getting better and better. He [Alk] eventually owns up to the fact that he love her [Chloe]. Obviously without saying ‘Chloe I love you’. [Laughs] I think she has to get with it and figure it out herself. He’s very wary about freaking her out. It’s that thing of trying to tow the line between helping her and the selfish reasons for wanting her for himself.”

On what he wants for Alk is future episdoes….
“I wish they’d let me win a fight,” explains Stone. “I find it’s always Chloe who wins. There’s a joke that he always is getting beaten up. At the end of the pilot I was reading the script and got to the part with Alk fighting and losing drastically and then it cuts to Chloe beating the crap out of the guy. She’s just learning how to use her powers and I’ve had them for two years and I’m a guy! [Laughs] More and more they are giving me more stuff to do. At the moment I’m just enjoying the story with Chloe and Alk becoming more of a leader.” 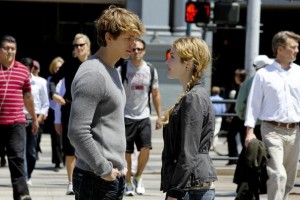 On coming to the US as a young actor…
“I came here for two weeks originally,” Stone says steepling his fingers. “I was visiting an agent that I had spoken to. At the time I was in drama school and I was really lucky to get placed in drama school. A lot of people scorned me for leaving drama school behind, but it just wasn’t for me. It was really expensive, I didn’t enjoy it, and I didn’t think I was getting any better. I would have stuck it out if I didn’t have the opportunity to come here. So I came over and checked it out, figured out I really liked it and I moved officially for about five months. I didn’t really have my work papers and then I got a film at the end of those five months; realized that getting a film doesn’t mean you get your work papers, and then I had to drop out of the film. That was really depressing. Then I waited a year, got my papers, came back, and now I’ve been here two years and everything is going really well. To get work papers as a young actor is virtually impossible.”

On the similarities between CHLOE KING and BUFFY THE VAMPIRE SLAYER….
“I think there are a lot of similarities, but there are a lot of differences as well,” he says thoughtfully. “There’s some better things with BUFFY and there are some better things with this. Then again, the show is still evolving and each episode is a little more different. I think the last episode was exactly what the show needs to have with the writing and the suspense and a lot of fighting at the end. I think our show is funnier than BUFFY. I didn’t watch too much of BUFFY, so I can’t really comment, and I can’t really remember it anymore. I think it’s more modern. More for now. I really like the story of the My, and I like that there will be more supernatural stuff coming out. There are things that then become more BUFFY-esque.”

Click on link: for AX’s Skyler Samuels talks about THE NINE LIVES OF CHLOE KING

Click on link: for AX’s review of THE NINE LIVES OF CHLOE KING – Season 1 – “All Apologies”