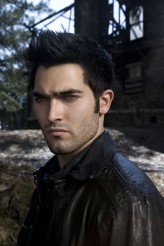 Only four episodes in and TEEN WOLF is leaving you wanting to more, which is a good thing since the latest episode “Magic Bullet” is heavy on establishing additional back story on the Argent family as a group of ruthless werewolf Hunters (but Hunters with a code).

It also throws in some weird mumbo jumbo on a magic bullet (not a silver bullet, a magic bullet) that results in some weird infection in werewolves that causes them to die within 48 hours if they don’t remove it properly. The mythology on the magic bullet is pretty confusing, but at least it gives Stiles (Dylan O’Brien) a chance to play off of serious-as-a-heart-attack  werewolf Derek Hale (Tyler Hoechlin) who has been shot by one of these special bullets.

The story begins with the arrival of Daddy Argent’s (JR Bourne) Hunter sister Kate (Jill Wagner). She’s attacked by an Alpha wolf, but she proves herself quite fast with her weaponry. She even manages to injure Derek with a “magic bullet” who conveniently enough happened to be on a deserted road the same exact time as Kate.

With Kate moving in for awhile, we start to get a better understanding of the Argent line of Hunters. Allison Argent (Crystal Reed) even reveals to Scott (Tyler Posey) that she has a secret talent – she’s an excellent archer!

Meanwhile, Derek is dying because of this magic bullet and needs Tyler to steal the same kind of bullet from the Argent house to figure out an antidote. Soon, Tyler and Allison’s make-out session terns into an awkward dinner date with her parents (and a delicate dance of Tyler trying to go through Kate’s things in order to find the cure).

When he finally get the bullet to Derek, he does some ridiculous thing with fire and hooray – he’s cured. What is so irritating about the solution is how simple and pat it is – and with little explanation why the guts of the bullet can actually cure him. It felt more magical, than practical and I just didn’t buy it.

However, there was some nice character-building going on throughout the episode. I loved getting to know more about Daddy Argent. Bourne brings so much weight (and a little gallows humor) to this role, and it’s great to see him get under Scott’s skin when they sit down for dinner. Kate is no slouch ever and Wagner has spunk and little bit of a mean-streak as Kate which makes her a very nice addition.

It’s the Stiles/Derek interactions though that really hints at the promise of the show. Stiles clearly doesn’t know what to do to help the injured Derek, but he tries to help, but doing so in his typical Stiles way. It’s looking like an interesting love-hate triangle is likely forming between Tyler, Stiles and Derek which could bode very well for the future of the series.

There is very little action in this episode, which is okay at times since the characterization is much needed at this point. This is a great ensemble and the traditional teen tropes of boy meets girlfriend’s parents, except in this case it’s werewolf boy meeting Hunter parents.

TEEN WOLF is just getting started and with this episode, it really is coming into its own. I love all the characters and the mythology of the werewolves and Hunters is starting to become clearer. And even if the explanation for how the magic bullet works and how Derek knew what to do to prevent his death seems a bit forced and anti-climactic, it’s a small gimme in the grand scheme things of the series.

I’m dying to see where all this is heading, and I’m glad the show took some time to slow down and let the quirks of all the characters come to the forefront instead another lame werewolf smackdown like last week.

And by the way, I’m going to go out on a limb here and make a prediction that the Alpha werewolf is a chick – Lydia Martin (Holland Roden). She had mad bowling skills last week, she masks that she’s an airhead and she’s the least likely person to be the Alpha wolf (and you know the Alpha has to be someone who is clearly not on anyone’s radar).