Home » Blu-ray Review: HARRY POTTER AND THE ORDER OF THE PHOENIX Ultimate Edition 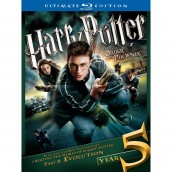 ©2011 Warner Bros.
HARRY POTTER AND THE ORDER OF THE PHOENIX - Ultimate Edition
Reviews

Blu-ray Review: HARRY POTTER AND THE ORDER OF THE PHOENIX Ultimate Edition

Not the best of the Harry Potter films, but this Blu-ray edition makes up for it with loads of new bonus features

Of all the HARRY POTTER films, I think HARRY POTTER AND THE ORDER OF  THE PHOENIX is by far the weakest. Condensing an overly long book into this very short film proved to be a daunting task. Additionally, Michael Goldenberg took over scripting duties from Steve Kloves (who was the writer on all the other films).

Kloves had a knack for finding the material that was necessary for the screen version and what could left out in order to attain a nice balance of character, story and magical action which, strangely feels very disconnected here without him.

The story picks up with Dumbledore (Michael Gambon) and Harry (Daniel Radcliffe) trying to convince the magic world that Lord Voldemort (Ralph Fiennes) has returned and the Ministry of Magic will have nothing to do with this – even going as far as ruining their names.

In order to combat this looming threat, Dumbledore brings back the Order of the Phoenix – a secret society created to stop Voldemort.

The politics and lack of major action is what keep THE ORDER OF THE PHOENIX being a complete misfire and David Yates direction lacks some of the spark of previous installments too (though he definitely gets a better grasp of the material in subsequent installments).

This is also one of those way-station movies, where there’s a ton of information to get across, but it’s primarily here for exposition to lead into the last four movies.

This is the YEAR 5 in the ULTIMATE EDITION Blu-ray editions of the HARRY POTTER films and it’s a must-have collection for die-hard fans (even if you previously own the standard discs).

Included are the Blu-ray and a digital download copy, with many of the previous DVD features imported over. You also get an additional hour of brand new content to delve into to make your Harry Potter movie experience complete.

One of the major parts of this new material is “Creating the World of Harry Potter – Part 5: Evolution” which digs into Harry Potter’s journey from innocent kid to world-weary adult.

This bulky box set also comes with a Year 5 lenticular card, two more character cards (you need to collect all eight box sets to get them all) and a gorgeous 44-page page book with rare images.

This also being Blu-ray there’s the “in-movie experience” which allows you to explore other parts of the Harry Potter world while experiencing the movie giving illuminating details into the people, places, creatures and movie magic behind the film.