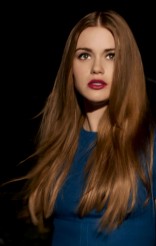 Who is the big bad Alpha werewolf? This show ain’t telling yet, but that's a good thing

I really hope MTV knows what it has with its new series TEEN WOLF. Each week, the show continually gets better and better with the characters getting more clearly defined and the horror ratcheting up. This is one of the best series it’s ever had on its network, and I hope it doesn’t get messed up any time soon (hey kids, here’s the new TEEN WOLF MOM crossover event).

“The Tell” begins with a kick-ass wolf attack in a video store where jock Jackson (Colton Haynes) is picking up a copy of THE NOTEBOOK to watch with his girlfriend Lydia (Holland Roden) even though he’d much prefer to watch HOOSIERS.

Walking into the store, he finds a dead clerk and what is clearly the Alpha werewolf roaming the store. Some choice suspense beats and Jackson getting pinned under video shelves makes for one of the best cold openings of the show yet.

This attack has major ramifications throughout the episodes. Most importantly, it really helps in making Jackson more than just a stereotypical ass jock and transforms him into a more panicked and erratic character. He knows there’s enhanced strangeness going on in the town, but now he’s actually terrified about what that is. Meanwhile, Lydia continues to evolve from the airheady hot girl, to something a little more complex. She saw the wolf while waiting in the car for Jackson, and now her parents have her doped up so she can cope with it.

In a weird way, both Scott (Tyler Posey) and Allison (Crystal Reed) are M.I.A. throughout most of the events this episode. It’s Allison’s birthday and she doesn’t want to be around (she’s a year older than the other high school students because she’s moved around too much and was held back a grade). Tyler decides to play hooky with her from school so she can have a great birthday and not have to answer questions to anyone.

Of course, things are rapidly falling apart in town with this latest wolf attack. Meanwhile, security footage caught a blurry photo of the wolf jumping through the video store window and then a couple of moments later, standing upright.

Meanwhile, hunter Kate (Jill Wagner) with two hunter back-ups heads into the woods to ambush werewolf Derek (Tyler Hoechlin) at his house. She reveals that the Hunters didn’t kill Derek’s sister – it was the Alpha wolf. And she wants to know who the Alpha wolf is. Derek doesn’t know, which makes him expendable (he escapes in the nick of time).

The mystery of who the werewolf is continues to amp up – and for the first time there’s a laundry list of potentially shiftysuspects. You have Scott’s veterinarian boss who acts weird when the Sheriff shows him the security footage and one of the teachers has that strange wolf like stance about him.

Yet, I’m going to take a page from the genre TV playbook and give my two cents about what will happen in the coming weeks. One of the Alpha wolf’s pack will be revealed (maybe the teacher or the vet), and everyone will think – oh, that’s the Alpha wolf. It won’t be, because I still think Lydia is going to end up the Alpha wolf. There was a bit of a red herring with her this episode, but so much points to her, it makes some sense (hey, send your boyfriend into the video store to get killed because you’re bored with him).

That said, I was also part of the collective on our staff that was predicting Chuck’s sister on CHUCK was going to be Agent X, so my guessing skills can some times be severely wrong.

The teen angst moments between Scott and Allison were nice – and continue to grow their relationship which will likely be challenged if she ever finds out he’s a werewolf. Yet it’s all the moments between Lydia, Jackson and Stiles (Dylan O’Brien) that stand out this episode.

I also really liked the parent-teacher conferences that gave a little more details about our main teen characters. It’s a clever way to introduce new viewers to who they are, but to also showcase just exactly what they may or may not be hiding.

I do have one small beef though. I think it’s important that the rickety old house in the woods be removed from the series after Season 1. It should be renamed “The House Where Bad Exposition Dwells.” Whenever characters enter the house, the series ends up de-volving into bad fight sequences (the Scott/Derek brawl) or in this case, bad Hunter/Werewolf action in this episode. Cheesy dialogue dwells there too. I don’t know what it is about this house, but it’s bad news – please just DON’T GO INTO THE HOUSE!

Still, it’s a minor quibble in an otherwise great hour of genre television. TEEN WOLF continues to be my favorite new show and if it can sustain the mystery and the genre elements for the latter half of the season, then MTV may have found its modern-day answer to BUFFY THE VAMPIRE SLAYER.

Oh, and one other thing, MTV, please, PLEASE create better “next week on TEEN WOLF” promos. The current one’s suck and they really don’t do a good job of getting you excited about the next episode. What you’re doing may work for reality shows, but not actual TV series. When you have a show this good, cutting a good preview should be the easiest thing to do.