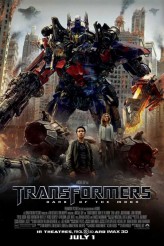 Great special effects, but the plot is studded with unnecessary detours

Director/producer Michael Bay promised that TRANSFORMERS: DARK OF THE MOON, the new third film in the saga of the heroic Autobots and the evil Decepticons based on the Hasbro toys, would have a better story than its immediate predecessor, TRANSFORMERS 2. In some ways, DARK OF THE MOON delivers on Bay’s words. Screenwriter Ehren Kruger comes up with a clever way to integrate the Apollo 11 space flight into the proceedings, using it to posit that NASA actually found something on the dark side of the moon that is of great interest to both the Autobots and the Decepticons.

Meanwhile, our hero Sam Witwicky (Shia LaBeouf) has saved the world twice (in the previous films) and received a medal from the President of the United States, but still can’t get a job out of college. He’s got a new gorgeous girlfriend, Carly (Rosie Huntington-Whiteley), who has a lucrative job and a too-admiring boss (Patrick Dempsey). Sam’s parents (Kevin Dunn, Julie White) show up just in time to nag Sam while he goes out on job interviews.

If the above paragraph makes you think, “What on Earth – or Cybertron – does any of this have to do with Transformers?”, you will not be alone. About half an hour (could be less, feels like more) could have easily been taken out of the film if Sam had just started the film with a government job. Even more time – not to mention emotional momentum – could have been saved if the girlfriend role had simply been recast, rather than made into a different character. We’ve seen Sam risk his life for Megan Fox’s character twice in the other movies. It may not have been Shakespeare, but it was what we were given as a very important story point. Now we’re told that was no big deal, but this time, it’s urgent. Sheesh.

When TRANFORMERS: DARK OF THE MOON at last gets down to business, it is done with great flair. The Decepticons are very scary-looking, with their metal fangs, spidery repair minions and a giant metal snakelike entity who is particularly destructive. Some of the comedic asides do work – Alan Tudyk starts stealing scenes in welcome form when he turns up as an aide to John Turturro’s character.

LaBeouf again provides a solid human center for all the craziness and Frances McDormand puts grace and grit into her portrayal of the government official in charge of operations. Dempsey has some fun with playing a fellow who has an increasing sense that he’s in way over his head. Ken Jeong gives his fearless all in a part that combines racism and homophobia. John Malkovich is amusing as Sam’s crazy boss, who seems to belong in a different movie altogether.

Peter Cullen is back as the voice of the noble Optimus Prime (sounding oddly like Liam Neeson here), and Hugo Weaving reprises vocal duties as the dastardly Megatron. Leonard Nimoy joins the voice cast, speaking for an important new character.

A lot of the actors are in uphill battles with the dialogue, which seems clumsier than usual this time around. There are bits of wit and humor, to be sure, but the exposition and even some of the emotional material is set out in blunt, on-the-nose terms.

The 3D does an excellent job of providing visual depth in every scene (this reviewer’s seat did not provide a fair vantage point to judge the effectiveness of elements meant to appear to come into the audience).

In summation, the actual Transformers action in TRANSFORMERS: DARK OF THE MOON looks great and should please those who enjoy the format. Getting there, however, transforms what should be a brisk set-up into a long haul.