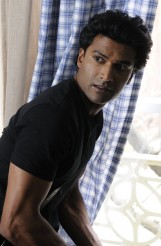 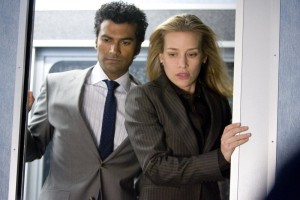 The Chicago native was already part of the NBC/Universal family due to his four years as Dr. Mohinder Suresh on HEROES, where his character was dealing with a lot of daddy issues even before he started to get scaly and super-strong. COVERT AFFAIRS allows Ramamurthy to do a number of things that HEROES did not – for starters, he gets to speak with his normal American accent this time around.

ASSIGNMENT X: As HEROES was wrapping up, did NBC ever say to you in the process, “We want to keep you in the family”?

SENDHIL RAMAMURTHY: Yeah. That’s how this came about. Even though I was still under contract, I was allowed to come and do [COVERT AFFAIRS] , and that was all because of NBC. They were really, really supportive – [USA president] Bonnie Hammer, Jeff Wachtel over at USA and then Angela Bromstad, who was the head of [NBC at that time], were really supportive about me making that transition to go onto USA and to do this show. They were really excited for me to do it. It meant a lot. It really is kind of like a family. You hear that word and you’re like, “Yeah, whatever, they’re talking the talk,” but it really wasn’t like that. They were incredibly supportive and really cared about my career. I’m really grateful for it.

AX: Tell us about your COVERT AFFAIRS character Jai Wilcox.

AX: Besides playing characters who are working through past and present conflicts with their fathers, are there similarities for you between COVERT AFFAIRS and HEROES?

RAMAMURTHY: It’s just a really different part for me, it’s a totally different experience. [HEROES] was a huge, sprawling, giant show with twelve cast members and giant special effects, and this is more of a character-based thing. There are five series regulars on the entire thing. It’s very character-based and I get to do a slightly arrogant, cocky, smooth talker. My whole job as an actor is to come in every day to work and flirt with Piper. That’s what we do. I have a very flirtatious relationship with her.

AX: Is it a relief getting to talk in your own accent?

RAMAMURTHY: It’s nice, it’s a nice change. Actually, I did a movie called SHOR IN THE CITY – in that one, I’m American.

AX: Is that a Bollywood film?

RAMAMURTHY: It’s a Bollywood film in that it’s shot in Mumbai, but it’s like a psychological thriller/crime drama. It’s basically about an American who comes over to set up a non-profit organization in India and ends up gets muscled by the Mafia and they go after the girl that he falls in love with and in the end, they push him too far, and it [shows] the depths that he’s willing to go to push back and fight back.

AX: Would you say that’s your Charles Bronson role?

RAMAMURTHY: Maybe towards the end, but all the way through it, no. He’s just like a guy whose heart is in the right place and he gets pushed too far.

AX: Did you speak Hindi for that?

RAMAMURTHY: No. It’s actually kind of cool. There are three different storylines – two of them are in Hindi and mine’s in English.

AX: Back to COVERT AFFAIRS, did you get to do any research on CIA operatives before you started work on it?

RAMAMURTHY: No, because I actually came on after the pilot. They shot the pilot while I was still on HEROES. And then I think they decided to make some sort of change, and I came in on the second episode. We found out HEROES was canceled and I was shooting the third episode of this. Never unemployed – because I was still under contract. It was still an NBC show. It’s NBC and they said, “We’ll let you go to do this show, because it’s for us.” And I said, “Okay.” And we all knew that there was a chance that [HEROES] wouldn’t come back, so we were all covering our butts a little bit and it worked out.

AX: How did you feel about the way HEROES ended in terms of the storyline?

RAMAMURTHY: I think they needed more. We needed to tie up stories and unfortunately, we weren’t able to. I didn’t fully believe we weren’t coming back until literally, we got the call. I just always thought that we would come back and it’s still kind of a little bit of a shock. That was tough, because that was a season finale – that wasn’t a series finale. And again, there are all sorts of issues that come into play. There are financial issues. I would love for there to be a movie to wrap it all up. Realistically, though, if you’re asking me, and this is not based on any sort of inside information at all, it’s just I can’t see how logistically that happens. A lot of us are off doing other things, and if it could work out, I would be totally up for it, if it could work out, I would love to do it, but I’m kind of dubious about how they could do it.

AX: On HEROES, it seemed like Mohinder went very dark there for awhile, wrapping people in cocoons and so on, and once he stopped being dark, there weren’t really repercussions for him. Did you ever think, “Shouldn’t there be a little more fallout from his actions?”

RAMAMURTHY: Yeah. I think we all did.  That was one of those things. You do what you can with what you’re given. Because a lot of us were doing things that we were like, “How are we doing this [without karmic payback]?” But in the end, it was still an amazing experience for me, and it opened up so many doors and it brought me to COVERT AFFAIRS. So I have nothing but good memories.

AX: You came to COVERT AFFAIRS after the rest of the cast was in place. Was it easy to fit in?

RAMAMURTHY: You know, surprisingly, it was. I came off such a great experience with HEROES. Our cast was so tight and I’m still in contact with all of them. That doesn’t happen a lot and I was not expecting it [on COVERT AFFAIRS, but] we get along like a house on fire, me and Piper and Chris [Gorham] particularly. We’re always working together, we do most of our stuff together and we just get along really well. We’re so happy to be there and we’re really invested in the work and we’re just enjoying ourselves tremendously. I love every second of it. It’s one of those things where you don’t have as much time, but there are these very intricate fight sequences that we’re doing. They brought in a Cirque du Soleil performer, and he trained me to do a whole parkour [free running] chase scene, where I’m running across shipping containers and bouncing off walls and doing shoulder rolls. It was awesome. I saw it all cut together and it’s great.

AX: Is parkour something you now want to try to do recreationally?

RAMAMURTHY: Parkour is something I want to do and that the insurance company will not allow me to do. I probably pushed it a little further than they wanted me to. Anything remotely dangerous they just don’t [allow]. It’s not worth it – I’m not looking to get hurt. In the end [if an actor is injured], that will stop production. You want to do as safe, but you want to add as much authenticity as possible. It’s very obvious when they’re shooting a guy from behind, it’s not you, it’s your stunt double.

AX: What would you most like audiences to get out of COVERT AFFAIRS?

RAMAMURTHY: Well, you know, it’s USA. It’s all about the characters. And as much as we do these action sequences that are fun to do, I love my character and I love the other characters that I’m working with and I’d love [viewers] to go away being invested in the story, just being invested in these people’s lives, and so far, it seems like they are. The feedback has been really, really great. Just tune in. It’s pretty cool.