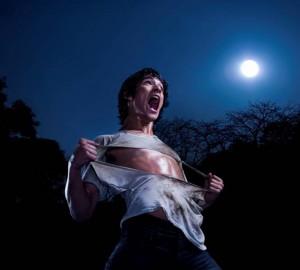 When CRIMINAL MINDS creator Jeff Davis was approached by MTV to reboot the 1980s comedy TEEN WOLF, he was a bit hesitant until he found out they wanted something more along the lines of the BUFFY THE VAMPIRE SLAYER TV series than a sitcom with a laugh track.

“MTV was always pushing us to go edgier,” Davis admits. “They gave us a mandate, that the writers turned into the three words we live by – Sexy, Scary and surprising. For us that meant plenty of twists and turns, lots of romance, a little bit of humor and plenty of scares. There’s blood on the show. There’s suspense and there’s murder as well.”

The series follows Scott McCall (Tyler Posey), a mild-mannered high school student who’s unassuming enough not to be a geek, but not strong enough to be a popular jock. Along with his best friend Stiles (Dylan O’Brien), they find a way to survive the social cliques of high school without ending up in the garbage dumpster every day.

However, things change when Scott is bitten by a wolf in the woods one night – and soon he realizes he’s an actual werewolf. His so-so lacrosse skills are now heightened, his hearing has become super-heightened and, well, new girl in town Allison Argent (Crystal Reed) actually likes him.

Now if only he prevent himself from transformuing during the full moon, everything will be okay. This being a serizlied TV show though – don’t count on it.

Davis recently spoke with ASSIGNMENT X in this exclusive interview about the evolution of TEEN WOLF (which debuts tonight on MTV after the MTV Movie Awards, with the second episode airing Monday night), what to expect in upcoming episodes and why he would be thrilled to inherit some of that BUFFY THE VAMPIRE SLAYER-like good will.

ASSIGNMENT X: Even though it has its own look and feel, the pilot episode reminded me a lot of what was good about BUFFY THE VAMPIRE SLAYER when I saw that TV show for the first time.

JEFF DAVIS: If we can even come close to BUFFY THE VAMPIRE SLAYER, I would be a very happy guy. It was one of my favorite shows and still remains. It has that kind of snarky humor, scares and fun. That’s what we’re going for with TEEN WOLF. If we can tap into something like that, hopefully we’ll find an audience.

AX: There’s an amazing cinematic look to the pilot – it does not look and feel like a TV show at all.

DAVIS: I credit that entirely with [director] Russell Mulcahy [HIGHLANDER]. He’s done TV, but he brings to it a very cinematic quality. Some of the shots that he comes up with. There’s a push into these woods behind Scott McCall’s back and it looks so cool. It’s the moment right before the deer attack, and it’s shots like that that I can always count on Russell for.

AX: I liked the in-camera shot where Scott’s in bed, he rolls over and then he’s in the woods.

DAVIS: I love effects like that. When the effects are so simple, it’s just a bag of leaves thrown on to the bed – when you can do a transition like that, it’s amazing. It’s little things like that, the practical effects that really get you. If we were a network show, we would probably think, well, we have to do it CGI and make the leaves look perfect for CGI, but it would look just like an animated sequence, but it looks great here.

AX: How many episodes is Russell directing?

DAVIS: Russell directed six episodes. We shoot our episodes in blocks of three. He directed the first block and the last block. Toby Wilkins, the director of SPLINTER and THE GRUDGE III, directed the second block and we made our second unit director, Tim Andrew, the director of the third block. He’s an amazing director too and will have a very long career.

AX: How do you overcome and educate people that this isn’t a Michael J. Fox TEEN WOLF redux, and how did you distill it down to the take that you did?

DAVIS: We’re certainly relying on our fantastic publicity department for one. The idea was to pay enough homage to the original movie, while jumping off in a new direction. I think that’s true of any remake. If it were a perfect movie, we would all be screaming, “don’t remake it, please don’t remake it,” but I think everyone remembers it fondly and there are ways to grow with the show. We did that by casting new and  upcoming people. I think if someone like J.J. Abrams can successfully reboot a series like STAR TREK, which I thought was brilliant, then maybe we have a chance. Considering that it’s MTV, we’ve also said, “maybe we should stop calling it a reboot or a remake and just call it a remix,” which is taking an old classic and giving it a new beat. How’s that for a soundbyte?

AX: How many episodes for the first season?

DAVIS: I had never done cable before this show. I cut my teeth in network television doing CRIMINAL MINDS which was very episodic. I wanted to do a serialized show, something that would tell a story over eight and a half-hours of time. I basically approached it like a movie. We’re telling the story of Scott learning to become a werewolf and gaining his werewolf legs essentially. He has this Romeo and Juliet romance going on with Allison played by Crystal Reed and a kind of master/apprentice relationship with Tyler Hoechlin who plays Derek Hale, who is basically teaching him “how to control this monster inside.” There’s also a great mystery that provides the foundation for the first 12 episodes. In a way we’re telling chapters with each episode. They’re going to feel like real, complete stories, but each one of them has a cliffhanger.

DAVIS: Most certainly. That was definitely one thing I wanted to steal from the BUFFY series is the idea of the Big Bad. You can definitely expect that.

AX: Will you be mixing mythologies of other monsters? Will vampires exist in this? Are you going to stick firmly that this a werewolf universe and that’s all that exists?

DAVIS: We have a very firm role that there will be no vampires in TEEN WOLF. I always say the same thing – ask me that again in five years when I’ve run out of stories.

AX: What about other monsters?

DAVIS: Not for the first season, but we’re living in the world of shapeshifters, so you certainly could expect to see some different one’s, if we’re so lucky to catch an audience.