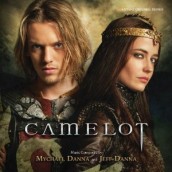 The Brothers Danna are worthy of The Round Table

Where the music of King Arthur tends to sweep in like a massively noble symphony on steeds, scoring brothers-in-arms Mychael and Jeff Danna do well by playing their leader as a subtler, second coming for another Showtime series that sexes up mythic history, this time in the realm of CAMELOT.

It’s an intriguing setting for a world music approach that creates its sorcery with Indian ragas, exotic percussion, horns and Celtic rhythms, an approach that’s as timeless as it is lyrical. While the Dannas might not have the magic to get the kind of trumpeting orchestral firepower afforded to the likes of Jerry Goldsmith’s FIRST KNIGHT or Miklos Rozsa’s KNIGHTS OF THE ROUND TABLE, they do just as well here with strong, melodic writing for an equally subdued orchestra. Yet it’s work that still carries a heroic, ominous weight to it, poetically well aware of the dire fates lying ahead for most of CAMELOT’s fresh-faced icons.

Though these characters unsheathe the most carnality since sweating armor met nubile flesh in EXCALIBUR, the music’s preponderance of church-like Latin chants and heavenly female voices more than convince of these knights’ spiritual virtue. The Dannas truly bring something new and enchanted to the music of the Round Table, let alone its king.