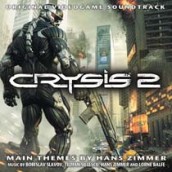 EA’s biomechanical warrior returns to the ruins of New York to take on all comers, aliens and humans included. And just as warrior and futuristic firepower are merged, the explosive work of main game composers Borislav Slavov and Tilman Sillescu seamlessly join with Hans Zimmer and Lorne Balfe into one mean musical machine. And  it must say something about Slavov and Silescu’s first-gen music to entice Hollywood’s most formidable composer to throw down in a big way with one of his own well-regarded warriors.

Yet together, the resulting onslaught of high-tech samples, gnarly guitars, explosively accelerating percussion, slithering alien motifs and Zimmer’s gloriously elegiac main themes speak in one, hugely exhilarating voice. CRYSIS 2 bursts with the kind of massive sonic production values that continue to break down the wall between “video game” music and the real cinematic deal. Yet where this soundtrack starts out as prime first person shooter adrenalin, CRYSIS 2 ups the ante by revealing a true emotional arch to its apocalyptic rumble, with a brooding solo violin and a soaringly tragic orchestra encasing the player in the sound of lone wolf heroism.

With an epic scope that spreads out over two CD’s in a single-priced set, CRYSIS 2’s music only gets more gripping as it goes along, with a booklet that has Zimmer, Slavov and Silescu revealing the secrets of a powerhouse collaboration, one whose example will hopefully draw more Hollywood big guns into a medium that’s all about multiple player creativity.