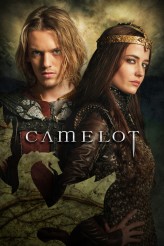 An excellent start to a lavish new Starz series

There have been so many screen versions of the Arthurian Legend, you can barely count them on your fingers. They range in status from movies with Sean Connery to TV miniseries starring Julianna Margulies, to cartoons by Walt Disney, yet each one has had something new to give to the legend, whether it is the story told from a new point of view, or one that’s watered down for children.

Now Starz has given audiences a sneak preview of its new series CAMELOT (it officially premieres April 1), which followed the final episode of SPARTACUS: GODS OF THE ARENA. A smart pairing of the two shows, as the audience demographic is probably quite similar.

Rather than jumping into the story of King Arthur, the Knights of the Roundtable, and Camelot as a thriving castle, creator Chris Chibnall (of DOCTOR WHO and TORCHWOOD fame) has taken audiences back to the moment when Arthur found out who he was and started his journey to become one of the greatest Kings England would ever have.

The series is richly produced and the costumes and sets are spectacular. The production value ranks right up there with SPARTACUS, or ROME, or DEADWOOD. It’s a gorgeous period series, and I can’t wait to see all of the new costumes and settings as the series progresses. The budget for this must be fantastic, or the producers know how to stretch a dollar.

The scenery, shot on location for the most part from the look of it, is spectacular! There are few shows on television that have the sprawling backdrops and landscapes of this series. It’s easy to get sucked into the scenery and the beauty of the land in which this was shot.

The actors are all excellent, and the three leads Arthur (Jamie Campbell Bower), Merlin (Joseph Fiennes), and Morgan (Eva Green) are perfectly cast and engaging to watch. It is impossible not to get sucked in from the first moments of Morgan’s confrontation with her soon to be dead royal father. Eva Green is absolutely mesmerizing as the evil sorceress. Campbell Bower is fresh faced, honest, and perfectly believable as a young King.

One of the fun things about this series will be to watch his character grow into the man he must become. Fiennes of course turns in a brilliant performance as Merlin, and I’m glad he’s a very normal down to Earth version of the character. He is a man with a single purpose to heal the country of England, and all of the pointy hats, funny magic gimmicks and the like have fallen thankfully by the wayside.

This is series has a lot of promise, and I can’t wait until it officially premieres April 1.