The big, bad Alpha werewolf shows its teeth, while Scott has to try and save everyone 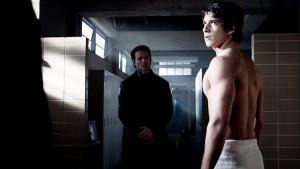 With only two more episodes to go before the Season 1 finale, TEEN WOLF continues to kick things into gear with more action and thrills in its latest one-hour than many shows manage to squeeze in during half a season.

With “Co-Captain”, Scott (Tyler Posey) finds himself still being taunted by Jackson (Colton Haynes) who continues to demand he be turned into a werewolf, even though Scott repeatedly tells him he doesn’t want that curse.

Meanwhile, Daddy Argent (JR Bourne) is convinced Jackson is the other werewolf and tries to play some cat and mouse games with him, until Scott jumps in to save the day.

Allison (Crystal Reed) is starting to fall for Scott again, but by episode’s end, she now knows that werewolves do exist (as in Derek Hale).

And the big bad Alpha werewolf Peter Hale (Ian Bohen) is making life hell for Scott. He reveals himself to Scott for this first time in this episode and tries to make a compelling argument for Scott to join his pack – even going as far as trying to date his mom. Since Peter is the uncle of Derek Hale (Tyler Hoechlin), we also see that he’s now being complicit in helping his uncle do his dirty deeds (or is he?).

There are tons of plot strands thrown into the mix, including Scott realizing that his veterinarian boss doctors normal animals 90% of the time and werewolves the other 10%.

It’s a doozy of an episode that has its fare share of action and suspense beats, yet what makes TEEN WOLF continually rise to the top are the softer, character moments that define the episode.

Watching Stile (Dylan O’Brien) interact with his dad on multiple levels (one to get information on the killings, the other to take care of him) results in some really great and subtle writing. It’s a very different relationship than we’ve seen on teen TV before, and it works brilliantly. 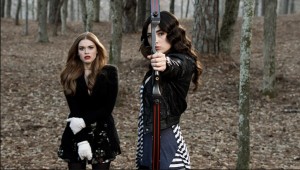 We also see Allison’s transition this episode from passive heroine, to pro-active expert archer and likely reluctant werewolf hunter. It’s going to be interesting to see how she handles the knowledge that Derek is a werewolf – and just exactly what her family is going to do with them in her basement.

“Co-Captain” is great fun, and another feather in the series’ hat. By taking the serialized route, the show feels more expansive and dense – with the stories actually having a continual forward momentum as opposed to Scott finding a nameless bad guy of the week, every week in genre shows that prefer the weekly procedural route.

This is a big part as to why this show works so well, and continues to thrive week after week. Again, the actors are also a major part of the show’s quick growth and with so many things that will need to wrapped up before the season finale, it’s clearly going to be action and story packed.