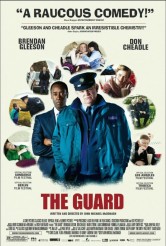 A strong cast buoys up a clever but sometimes wobbly script

In Ireland, the police are known as “the garda,” pronounced “guard,” hence the title of the film. Writer/director John Michael McDonagh’s film takes place in a small coastal town in Connemara in the west of Ireland, where Sergeant Gerry Boyle (Brendan Gleeson) can get away with a good deal of irreverence and petty larceny. This seemingly puts him on a collision course with straitlaced FBI Special Agent Wendell Everett (Don Cheadle), who doesn’t like Gerry’s attitude, much less his faux-ignorant racist taunts.Everettis in town investigating a big-time drug-smuggling ring, while Gerry looks into a gory murder. Their paths converge when it seems Gerry’s case relates toEverett’s mission.

At this stage in the history of crime drama – or crime black comedy, as is the case with THE GUARD – whether a piece is distinctive or forgettable is as much or more in its style and execution as in the bones of its plot. McDonagh is clearly aware of this. Both the law enforcement people and the crooks here have extremely idiosyncratic dialogue, delivered by an excellent cast. There’s pretty much no going wrong with Gleeson, who is actually able to play the notion that Gerry’s deadpan racial baiting is meant as a reaction to what he perceives as Everett’s superior FBI attitude toward the local cops. However, even though Cheadle is clearly on board with this (he certainly didn’t take the part in this production for the money), a lot of people will be more appalled than amused. It seems like an echo of the Quentin Tarantino desire to be able to use racial insults on the basis of being cool enough to get away with it – trouble is, nobody is that cool.

This aside (and it becomes a big “this”), THE GUARD aspires to exist on the border of black comedy and quiet drama. Speaking of Tarantino, McDonagh definitely gets into the spirit of that filmmaker in the big guns-and-scenery-blazing action sequences, which are impressively staged and suitably operatic in crime drama terms.

THE GUARD succeeds in being intriguing and mostly entertaining, as the characters are good and the performances are terrific. Besides Gleeson and Cheadle, Liam Cunningham makes a wonderful criminal mastermind and Mark Strong is great fun as a philosophical working-class English thug who is part of Cunningham’s crew. McDonagh also conjures a great sense of environment, so that we feel that we are in a small community so far out of the mainstream that the normal rules don’t fully apply.

Even so, there’s a slight whiff of self-consciousness here. Gleeson makes everything he says sound absolutely like something Gerry would say. Still, sometimes it seems more like McDonagh going for a laugh then Gerry making a point or even just being himself, especially when we become clear on his ultimate goals.

Overall, THE GUARD is worth seeing for its actors and some of its smart dialogue, but sometimes it becomes smart-ass past the point of many viewers’ enjoyment.