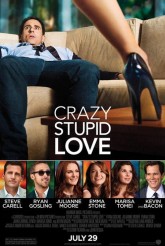 A star-studded would-be chick flick that doesn’t appear to have the slightest interest in or clue about what chicks like, in romance or in movies

Let’s begin by saying some good things about CRAZY, STUPID, LOVE. It has a top-notch cast and the screenplay by Dan Fogelman is mostly well-structured, except for one whopping pivotal issue that is never satisfactorily explained. However, the film bogs down in its details (and lack thereof) and the growing realization that we don’t particularly like or believe in any of the characters. This would clearly be a problem for most films – in a romantic comedy, it creates a pretty dire atmosphere by the end.

Steve Carell plays Cal Weaver, who is stunned when Emily (Julianne Moore), his wife of twenty-five years, announces that she wants a divorce.Calis especially horrified by the revelation that Emily has slept with one of her coworkers.Cal moves out, gets a small apartment and begins hanging out at a local bar. He so often and so loudly bemoans his circumstances that he is finally silenced by the waterhole’s reigning lothario, Jacob (Ryan Gosling), who promises Cal a makeover if he’ll just stop whining.

The synopsis requires a break here, because this gesture on Jacob’s part is never explained. Carell is very personable, and Cal seems like a decent fellow who has been faithful in his marriage and is a loving father, but these attributes are not in evidence at the bar. To people encountering him in this environment for the first time,Cal is a loud, weepy drunk. If this is meant to show a kindly streak on Jacob’s part, it doesn’t, because Jacob is insulting to Cal throughout the process, indicating instead that Jacob simply wants to broaden his horizons by setting people up for humiliation. The film only shows Jacob being obnoxious/charming in his pick-ups for one-night stands and never the morning after (until of course he gets into the romance we know is coming), but he doesn’t seem greatly attuned to the feelings of others. If we really want to take the time to examine Jacob psychologically, it seems that he is using Cal to validate his own techniques, but Jacob already knows they work. If Jacob is actually using Cal because subconsciously, Jacob wants to become a faithful fellow who believes in love, this doesn’t work either, because all he’s seen of Cal at the time of first approach is a very unhappy hard drinker. In short, major plot fulcrum never feels like it makes sense.

Back to the story. As Cal pines for Emily, the couple’s thirteen-year-old son Robbie (Jonah Bobo) has a wild crush on his seventeen-year-old babysitter Jessica (Ashleigh Tipton), who in turn adores Cal and gets some very unfortunate advice from a classmate about how she should handle this. Although Emily isn’t interested, her workplace fling (Kevin Bacon) continues to woo her. Nice young law student Hannah (Emma Stone) refuses to go home with Jacob – until the guy she didn’t seem like she wanted to marry anyway fails to propose to her, and then …

The actors are all wonderful, with Gosling actually making something like a human being out of Jacob, despite the odds. However, we don’t know much about anybody here except for their romantic longings. This is true in a lot of romantic comedies, but it creates an abyss here. Various characters go on about having met their soul mates, when we have no idea what is bringing them together except sexual attraction and, in some cases, shared history. This is actually enough to start a relationship with, but “soul mates”? We don’t know what their souls are like individually, let alone what their opposite numbers might be.

The film also has major incidents where things that characters think are sweet gestures (or at least gestures that can be ignored) would likely cause a real person, especially an image-sensitive teenager, to die of mortification, or at least never forgive the offending party.

There is at least one good story surprise here, some real laughs and strong performances. Unfortunately, these are accompanied by a lot of much less worthwhile stuff that makes CRAZY, STUPID, LOVE something of a slog for much of its running time.