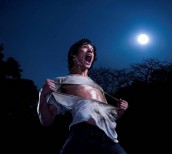 TEEN WOLF has a lot of promise and Tyler Posey as the title character has a lot of charisma, plus great chemistry with Dylan O’Brien as his best bud Stiles, but here’s hoping that the show’s plotting gets a little more original than the “A” storyline in “Second Chance at First Line.”

Scott (Posey) and Stiles have figured out that Scott’s lycanthropy isn’t triggered just by the full moon, but by any strong feelings of aggression or arousal. This would definitely be a problem on the lacrosse field, where aggression against the opposing team’s players is pretty much a requirement. In Scott’s case, he is also threatened with death by mysterious fellow werewolf Derek Hale (Tyler Hoechlin), who is afraid that if Scott transforms in public during the game, it will cause disaster for all werewolves.

Since Scott and Stiles believe that Derek killed a girl in the woods, they go digging on his Derek’s isolated property – and find a buried wolf that then turns into a dead girl. Derek is arrested by Stiles’ sheriff dad (Linden Ashby), but he’s released when it is determined the girl was killed by an animal. Scott and Stiles wonder if there may be different types of werewolves, since neither Scott nor the creature that bit him were in full wolf form. Scott manages to control his aggression enough to play brilliantly, his lacrosse helmet hiding small fangs and his yellow eyes intimidating players on the other team into giving way. After the game, Scott enjoys a get-together with new girlfriend Allison (Crystal Reed) without wolfing out. Things may be looking up.

The questions about various species of werewolves and just what the deal is with Derek are intriguing. However, they get set to the side by the typical TV teen drama of how our hero can make it to the big event without ruining his life. Granted, “Second Chance at First Line” is undoubtedly the first time werewolves and lacrosse have both factored into the details of this tradition, so kudos for originality on this front, but the overall feel is one that induces concern for future episodes. Just how formulaic is the high school stuff going to be?

Granted, it is fun to see Scott use his super-strength to play the game, even if it’s a type of cheating. There’s also some promising goofy humor with the lacrosse coach, whose motivational speeches consistently trail off into the ether.

TEEN WOLF is certainly agreeable, but after the promise of the first episode, adolescent and older viewers will probably hope that future installments tilt more toward the wolf and less toward the teen conventions.