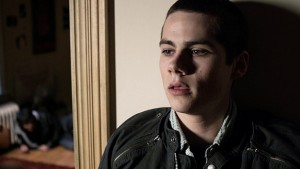 Anyone looking to create a successful genre show on network or cable television, needs only to look as far as the exceptional TEEN WOLF. What it accomplishes on a weekly basis is phenomenal. From how it creates likable characters and dialogue that isn’t too meta and not too jokey to how the look of the show, courtesy of Director of Photography  Jonathan Hall, provides some of the best cinematography on ANY TV show currently out there.

This does not look like a TV show period- it looks and feels like a feature film and as “Lunatic” proves, the series can bring home a creepy, suspenseful cinematic flavor – something director Tim Andrew handles with ease.

There is something even more interesting going on with “Lunatic” that few TV shows would dare to tread – our hero Scott (Tyler Posey) is slowly showing signs of being less and less a hero. As his wolf affliction intensifies, he becomes arrogant, angry, and blood-hungry. He alienates his girlfriend Allison (Crystal Reed) so much in the last episode that she dumped him and this episode he betrays his best friend Stiles (Dylan O’Brien) by macking on Lydia (Holland Roden) – the girl Stiles has had a crush on forever. Essentially, Scott is becoming a huge douche.

“Lunatic” focuses on the aftermath of the night school attack in the last episode, and deals with Scott trying to get things under control as the full moon is in, well, full bloom again.

The Alpha werewolf (as we saw last episode) has major sway over Scott, and starts to play major tricks with him. He wants him to kill his current “pack” of friends, and he’s doing that – it’s just with his words and actions rather than with claws and dismemberment.

Meanwhile, Jackson (Colton Haynes), surprisingly, is becoming an unlikely anti-hero of the piece. This character has evolved so much in such a short period of time, but from his suspicions about Scott, to the claw marks on his back from werewolf Derek (Tyler Hoechlin) to his slowly evolving affection to Allison – Haynes is getting a ton of dramatic stuff to play with. Where this is heading is still a mystery, but it’s great to see what started off as a rather predictable, useless role evolve into something with multi-layers and dimensions.

Back at the Argent house, Allison’s dad (JR Bourne) is ready for some wolf action and knows that it’s time to stop the Alpha. However, there’s now some suspicion that perhaps one of the high schoolers might be a werewolf too, and the prime suspect (in their eyes at least) happens to be Stiles.

Allison is also going through issues too. She is finding herself attracted to Jackson, while she also knows her daddy is lying to her about why he has guns lying around all the time.

When Derek shows up at the end of the episode for some more werewolf on werewolf action with Scott, he tells our title Teen Wolf that there might be a way to stop his curse – by killing the Alpha and he will help him do it (but he needs help finding him).

TEEN WOLF has so many twists and turns in a given episode (and actual action and horror), it’s amazing that this little MTV show is actually more entertaining (and epic looking) than other shows that clearly have the same intent.

Take a look at FALLING SKIES to see how that show struggles to keep a balance between character and alien action (while looking, for the most part, really small and cheap) while THE NINE LIVES OF CHLOE KING has no idea how to strike a balance between its teen angst and genre elements with a cinematic look that’s strictly ABC Family.

TEEN WOLF gets it right, and it getting so good (and staying good) as it comes into the home stretch of Season 1. Thie definitely doesn’t bode well for what riches and coolness Season 2 will have to offer. Of course, first, please reveal who the Alpha werewolf this season – otherwise, fear the wrath of another THE KILLING backlash. And please, PLEASE don’t make the Alpha one of the teachers at the school. That would be a little lame an obvious (even if it did end up being the crazy Coach).