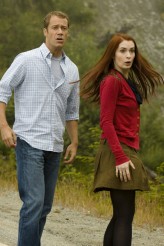 Episodes of EUREKA can approach THE USUAL SUSPECTS in structural complexity, with a lot of individual actions affecting one another until calamity erupts. This is the case in “Reprise,” which is both entertaining and suspenseful – and also intentionally very funny.

When visiting Department of Defense scientist Holly (Felicia Day) hits town, she is clearly hyper-bright but also so nervously chatty that she has designed a psychological biofeedback unit that she listens to the way others absorb self-help discs. Fargo (Neil Grayston) assumes Holly has been sent to close down Global Dynamics. When Holly asks to see Fargo’s FTL (faster than light) drive, Fargo demonstrates it on her and Holly disappears. Allison’s (Salli Richardson-Whitfield) teenaged son Kevin (Trevor Jackson) figures out where Holly is and finds her – he’s nostalgic for the times he’s helped out Sheriff Jack Carter (Colin Ferguson), which Jack doesn’t remember because they happened in the “other” timeline.

Zane (Niall Matter), who now knows he has an alternate past with Jo (Erica Cerra), burns down her new house to get her attention. People are starting to act out all over Eureka. Also, a stasis field is starting to cause things to essentially stop in place. This is the result of Henry (Joe Morton) coming up with a device that will let him “stop the world” to spend time with his wife Grace (Tembi Locke) – a desire that has been in turn caused accidentally by the interaction between Holly’s psychological device and a music playlist, which causes listeners to act upon the song lyrics (“Eye of the Tiger,” “Burnin’ Down the House,” “I’ll Stop the World and Melt With You,” etc.). When things get back to as normal as they’ll ever be in Eureka, Holly reveals she’s not there to shut down GD; she’s there to look over the FTL drive before the DOD gives Fargo a twenty-billion-dollar grant to put his invention in a new spacecraft.

On the cliffhanger front, Allison is shanghaied by the evil returning Beverly (Debrah Farantino), who implants a memory-altering device in Allison’s brain.

Amy Berg’s script does a terrific job of weaving together bits that seem innocuous or even happy – Henry’s gift to Grace – and letting them have a domino effect on each other. It’s especially gratifying because all of the pieces are intriguing in their own rights, so when they fit together, it has the “Aha!” effect of a good mystery.

Day is a delightful guest, though it’s hard to believe a character this charming (if talkative) would have Holly’s supposedly social outcast status. (Techno nerd boys everywhere would be worshipping at her feet.) The parallels between Jack trying to honor Kevin’s memories of a past Jack doesn’t know and the growing romantic tensions between Jo and Zane are handled appealingly, and we find ourselves rooting for the newly-enlightened Zane to win Jo over – again.

As for the cliffhanger, it too is dealt with deftly. Allison’s rescue of an injured motorist is so straightforward in an un-EUREKA way that we start to wonder why it’s being shown to us – and then we get the kicker that it’s what Allison remembers of the time she was kidnapped. Well done!

Altogether, “Reprise” is an episode that shows EUREKA firing on all thrusters.