Home » CD Review: PRETTY MAIDS ALL IN A ROW soundtrack 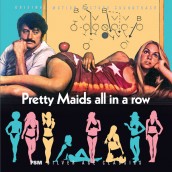 CD Review: PRETTY MAIDS ALL IN A ROW soundtrack

One of those great, groovy WTF early 70’s flicks, PRETTY MAIDS ALL IN A ROW cast randy Rock Hudson as a football coach-cum-guidance counselor, whom most of the high school is falling in the sack, couch and car with when they aren’t falling over dead.

There’s something more than a bit off about the enticing orchestrations, an electronic and orchestral darkness which comes more prominently into play as MAIDS’ murder mystery peps up, with a particular highlight using insane fuzz guitars to go into a memorial’s church organs. But if there’s one thing here you’re not going to get out of your head, then it’s the love generation melody and lyrics of Schifrin and Mike Curb’s “Chilly Winds.” Perhaps the squeaky clean Osmonds thought they were singing for some hippie Ralph Waldo Emerson flick when they recorded this freewheeling song, a tune whose melody takes root throughout MAIDS. You’ll be happy to get it on with Schifrin’s girls on Film Score Monthly’s seduction-ready CD, not to mention finally being able to watching them take it off at Warner Brothers’ Archive label- a great enough reason alone for that on-demand label to exist.

Click on link: To buy the PRETTY MAIDS ALL IN A ROW soundtrack