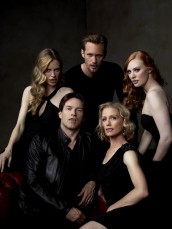 A strong episode that intensifies crises, starts some new ones and lets several of the supporting actors shine with multiple personalities

Jason (Ryan Kwanten) arrives at Bill’s mansion just in time to stop vampire Jessica (Deborah Ann Woll) from walking spellbound out into the sunlight. Jessica nearly rips Jason’s head off, then kisses him passionately. Jason chains Jessica up again next to Bill, who is grateful (and willing to cover up Jess’s bespelled killing of a human guard). Jessica dreams that she breaks up with human boyfriend Hoyt (Jim Parrack), then kills him when he says he can’t live without her and winds up having wild sex with Jason. In reality, when Jess tells Hoyt she wants to move out, he is so hurt that he says everything he can think of to wound her and rescinds his invitation. When Jessica goes to Jason, he is so horrified by the idea of betraying his best friend Hoyt that he also disinvites Jessica from his home, leaving her alone.

Lafayette (Nelsan Ellis) gets possessed by the spirit of Mavis (Nondumiso Tembe), a black woman of the ‘30s whose white, married lover killed their infant son. Mavis, in Lafayette’s body, is drawn to baby Mikey because he has the doll that Mavis intended to give to her own child.

Tommy (Marshall Allman), thrown out by big brother Sam (Sam Trammell), shapeshifts into Maxine Fortenberry (Dale Raoul) in order to sell her land rights to a surveyor. Sam, meanwhile, is over at girlfriend Luna’s (Janina Gavankar), where her werewolf ex Marcus (Daniel Buran) shows up to see their little daughter – he’s very displeased that Luna has taken up with a non-werewolf shifter.

Marcus is also the head of the Shreveport werewolf pack. He declares that the weres are going to sensibly stay out of the witch/vampire war that’s brewing. Alcide (Joe Manganiello) says he’s all for this, but Alcide’s girlfriend Debbie (Brit Morgan) intuits that Alcide still wants to help Sookie, and Sookie comes with vampire baggage.

Eric is so damaged by the silver chains that Sookie has him drink from her – and Eric has Sookie drink from him. Eric would like to simply run off with Sookie, but Sookie feels they should both stay and help Bill with his witch problem. She is afraid Eric couldn’t live with himself if he ran from a fight – though this version of Eric is happy to do so if he can stay with Sookie – and Sookie feels a moral obligation to protect her vampire friends. Bill doesn’t want Sookie putting her life on the line, but she and Eric persuade him that it’s Sookie’s right to decide for herself.

Bill tries to negotiate with the witch Antonia-in-Marnie’s body (Fiona Shaw) and sets up a meeting, but Antonia is dubious of Bill’s promises and Sookie mind reads that Antonia is doing a spell. All-out battle rages between witches and vampires. Pam (Kristin Bauer Von Straten) nearly kills Tara (Rutina Wesley), who is on the witches’ side. Bill stops Pam, saying he will execute her if she harms Tara. Tara wants to know why Bill saved her life – Bill says Tara knows why. Eric rediscovers his own ample bloodlust in the fight but is then bespelled again by Antonia, Bill is captured with silver – and Sookie is gut-shot. Alcide hears Sookie scream and runs in to scoop her up – much to the ire of Debbie.

Alan Ball, who adapted TRUE BLOOD for television, has a really good time letting a lot of people play multiple roles here. There are a few who are literally doing this – Ellis is Lafayette and Mavis-in-Lafayette, Raoul is Maxine and Tommy-as-Maxine – but seeing Parrack play two entirely different versions of the breakup scene creates a similar vibe. In all instances, the actors display tremendous versatility.

The Sookie-Eric-Bill situation continues to be extremely interesting, with the wrinkle that having all of them rise to their best selves just makes things even more complicated. Eric and Sookie exchanging blood turns out to be more erotically charged than their regular sex scenes. The sequence where they’re in a bed in the middle of a snow storm is a bit on the trippy side (is this a hallucination they’re sharing because Eric is high on fairy blood and Sookie is sailing on V?), but it’s fun and makes sense with Eric’s Viking origins.

Shaw is simply a blast as the imperious, irritable Antonia – she’s intimidating and yet very funny. We see how she can sway her followers and at the same time understand why Sookie feels compelled to stand against her. Ball again earns his allegory – one can apply this tale of righteous grievance that over-reaches into unrighteous, mutually destructive vengeance to any number of real-world situations. It’s entertaining, intellectually worthwhile and makes us wonder what will happen next.