A bang-up season premiere with more action, horror and humor 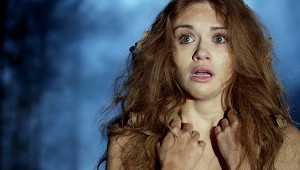 If you thought the greatness that was Season 1 of TEEN WOLF was a fluke, wait until you watch the Season 2 premiere “Omega.”

MTV and executive producer Jeff Davis have crafted a canny, smart reboot of the 1985 teen comedy which starred Michael J. Fox and found a way to make it the coolest high school monster show this side of BUFFY THE VAMPIRE SLAYER.

Season 2 of TEEN WOLF picks up all the dangling pieces from the Season 1 finale “Code Breaker” where Derek Hale (Tyler Hoechlin) is now the Alpha werewolf, Lydia (Holland Roden) has been attacked and taken to the hospital, Jackson (Colton Haynes) has forced Derek to bite him, and Scott (Tyler Posey) deciding he wants to be a lone wolf.

“Omega” finds Lydia having weird visions after being attacked and leaving the hospital to escape. The question is: is she going to turn into a werewolf or something else. And, who attacked her? Plus, is there a difference if you’re scratched by a werewolf and if you’re bitten (likely something that will be explored more fully as the season wears on). Then again, it was stated that her marks would not turn her into a werewolf, so, I guess we’ll have to wait and find out what she is becoming (or what she already was).

Jackson is enjoying the newfound feeling of being bitten, but he starts to bleed black ooze out of his nose and ears. Derek says his body is rejecting the bite. A very cool twist.

Argent (JR Bourne) has made a truce with Scott – don’t see his daughter Allison (Crystal Reed) and he won’t kill him. That’s the only truce he’s ever made with a werewolf. Don’t expect that truce to hold though — they’re teenagers and highly hormonal. 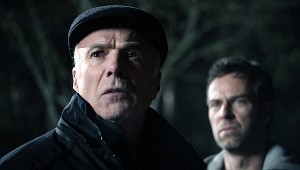 Then there’s Gerard Argent (Michael Hogan) – the grandfather to Allison and fuming mad that daughter Kate Argent (Jill Wagner) was killed by one of these wolves. The truce is now off  and so is their code – it’s now hunting season and it doesn’t matter who is one, he’s going to find them and cut them in half.

There’s also a mysterious photographer at school that is also taking an interest in Allison.

The pieces to the Season 2 puzzle have kicked into high gear. On one hand, you have Derek looking to create a pack and you have the Hunters on the other side trying to stop them. There’s also the hint that more wolves are on the way knowing that the Alpha is in town. An Omega wolf appears for that purpose, but the Hunter’s slices him in two.

It’s also nice that even though Allison and Scott can’t see each other, they still are. And Allison has become the third wheel in their de facto Scooby gang. It’s clear there will be a calling that Allison must choose from as the Hunters declare war on the wolves. She’s intended to be a leader – which should pose problems for Scott later.

It’s also cool to not know exactly what Lydia is right now – and also the mystery as to why Jackson’s body is fighting back to not become a wolf.

This year, we also get a fancy opening title sequence – which is pretty awesome. I guess the argument is if THE WALKING DEAD and AMERICAN HORROR STORY can have exceptional opening titles, why can’t this show too.

Like last season, TEEN WOLF packs in a ton of story and doesn’t let up. The writing is tight, funny, spooky and always moving forward, while director Mulcahy continues to bring a feature film sheen. Nothing looks quite like TEEN WOLF on TV, and that’s why it’s so good.

Now if MTV can order more than 13 episodes a season, we wouldn’t have to wait a whole year to get new episodes.