A standard cop show elevated by a strong cast 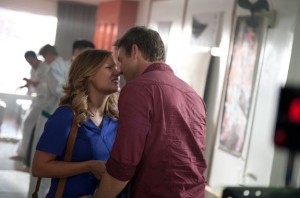 CBS and USA have set the bar and template for the police procedural. CBS plays it straight, for the most part, while USA has a little fun with it.

And A&E has found a nice middle ground with their Florida-set series THE GLADES, now entering its third season.

There’s something familiar, fluffy and a bit routine about THE GLADES. It has a great cast with Matt Passmore serving as the anchor of the show as light on his feet/always ready with a quip cop Longworth while his now girlfriend Callie (Kiele Sanchez) offers up some great chemistry.

The Season 3 premiere “Close Encounters” begins with what appears to be an alien sighting by a couple making out in a car – followed by the discovery a dead body. Was it an alien abduction gone wrong, or was someone murdered?

Well, you can guess, this being a reality-set series, that it was murder and the suspects begin to pile up. The guy who died was a UFO-nut and rich. He was married to a young, blonde hottie, but also involved with the head of a shady UFO organization called F.E.T.A.

Navigating who has done what to whom isn’t really what THE GLADES is interested in – it’s watching Passmore work his magic and charm in putting all the clues together.

I can see why THE GLADES has been so popular for A&E – because Passmore is a fantastic anchor. If you like this kind of police procedural (I don’t), he makes things move by quickly and takes even the weakest material and finds a way to elevate it.

The other plus is the production value on the show is network quality. You could put this on CBS and it would fit snugly along their line-up and you wouldn’t know the difference.

Should THE GLADES be smarter? Perhaps. However, as a summer procedural series, it satisfies a certain niche. It’s not good, not great, but somewhere in the middle which is not a bad thing when you’re trying to escape all the reality TV programming all the other networks and cable outlets dump into the summer months.