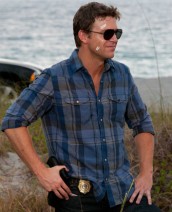 The second season kicks off with murder, crime lords and a breezy Florida attitude

Entering its second season, THE GLADES is A&E’s attempt to capture the breezy, fun-filled style of USA’s signature crime series BURN NOTICE and for the most part it works.

THE GLADES is familiar detective series mumbo jumbo, but it is largely kept alive by an engaging performance by Matt Passmore as Jim Longworth. He’s a former Chicago cop, now working for the police in a small town in the Florida Everglades.

The Florida attitude is different, but Longworth has adjusted and as Season Two begins, he continues his unorthodox approach to solving crime (not to mention enjoying a nice snack and smoking a good cigar while investigating a case).

The season two premiere “Family Matters” focuses on a woman found dead in Little Havana who happens to be the daughter of a Cuban crime lord. In order to avoid a gang war, Longworth is granted a few days to solve the crime before things get out of control.

The end result is familiar to anyone who watches these kind of detective shows. Again, it’s the way the crime is solved that keeps you invested in going along for the ride and Passmore is great in the role. He brings a different style and attitude to what would normally be routine cop show cliches.

He’s surrounded by an able supporting cast, but it’s his struggling relationship with Callie Cargill (Kiele Sanchez) that keeps the show grounded. She’s a single mother whose husband is being released from prison. She’s planning on getting a divorce, but she needs to get her life in order first – especially for the sake of her son. They both have a thing for each other, but now there’s an added complication by episode’s end that will make their relationship even more difficult.

This on-going storyline keeps THE GLADES from getting too sure of itself when it comes to the police work – and it’s one of the major pieces that keeps the show from getting stale.

Still, for all the positives, THE GLADES is still what it is – a by-the-numbers cop show with a few redeeming qualities that sets it from the pack. USA does this kind of thing well, and A&E is now jumping into the game with the same quality control. However, if this isn’t your cup of tea, there are more complex and engaging series out there that are far better and more original than this (AMC’s THE KILLING anyone?).