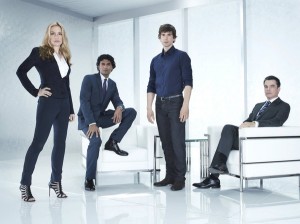 On COVERT AFFAIRS, which begins its second season tonight on USA at 10 PM, novice CIA operative Annie Walker (Piper Perabo) looks like just the gorgeous young woman next door, but she’s shown herself to be highly capable undercover. Her CIA handler is Joan Campbell (Kari Matchett), who is married to CIA Director of Clandestine Services Arthur Campbell, played by Peter Gallagher. When last season ended, higher-ups were trying to force Arthur to resign and had offered his job to Joan, making for a tricky situation, though Arthur and Joan vowed to support one another. Stay tuned to find out who’s in charge now.

Native New Yorker Gallagher is no stranger to television – his character Sandy Cohen on THE O.C. was ranked 25 in TV Guide’s “50 Greatest TV Dads of All Time” list – and more recently, he had an arc on CALIFORNICATION. He’s also known for his film work, starting with THE IDOLMAKER, and moving on through projects including SEX, LIES, AND VIDEOTAPE, THE HOUSE ON HAUNTED HILL and WHILE YOU WERE SLEEPING. Gallagher gives us the classified info on playing a spy master here.

ASSIGNMENT X: How did you come to be involved with COVERT AFFAIRS?

PETER GALLAGHER: Well, you know, I’m always looking for work. And I was really looking forward to working with [executive producers] Dave Bartis and Doug Liman again. Doug directed the O.C. pilot. He and Dave were producers on the first season of THE O.C. and I really loved working with them. I just love the way they make movies and the way they tell stories and I like the people around them, the fact that they’ve been friends for a long time. So I’d been talking to them about various things since then, and Dave called me up and said, “Well, we’re doing this show, and there’s this part you could do without makeup. Are you interested?” And I said, “Yeah.” So [he said], “Let me introduce you to some of the people.” They were lovely, [the creators/show runners] Matt Corman and Chris Ord. I’ve been around the block long enough to know that the people you work with have a lot to do with the quality of the experience.

AX: With your character Arthur Brooks, would you say his priority is his job, or his marriage, or is he still sort of working that out?

GALLAGHER: I think my character is juggling job and marriage like everybody else, just slightly different circumstances.

AX: But in Arthur’s case, his wife Joan is part of his job.

GALLAGHER: Part of his job, right. I can’t imagine how hard it would be to actually be working with your wife and then compound that with working in the C.I.A. with your wife. Security could be compromised, lives could be lost and it heightens it all, but it’s still I think essentially [nearly universal] issues. 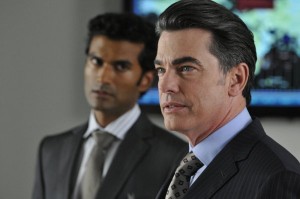 AX: How is working with Kari Matchett, who plays your wife?

GALLAGHER: Playing opposite Kari Matchett is delightful. She’s a wonderful, wonderful actress and a really lovely person and we have fun together. And I like the opportunities we’ve been given in a couple of episodes to show not just the tension in our [onscreen] relationship, but the reason why we’re together.

AX: How do you think COVERT AFFAIRS balances story arcs and standalone episodes?

GALLAGHER: You know, I don’t really know. I suspect they’ll be adjusting the length and the specificity of the arcs. At this point, I’m not getting the vibe of any real long arcs – I’m getting the vibe of shorter things going on, but to be honest, nobody tells me anything. I’m just going on when I open the script and find out I haven’t been killed yet. [laughs] That’s where I start.

AX: Have you done anything else in the last year that we should know about?

GALLAGHER: RESCUE ME, which was on the same night [as COVERT AFFAIRS last season] on FX. I had a wonderful arc. [RESCUE ME star/co-creator] Denis Leary is a dear friend and he’d written this great part of Father Phil, a priest that only he would know that I’d be the guy to play, and all my scenes were with Denis. BURLESQUE came out in November with Cher and Christina Aguilera, and CONVICTION came out in October with Hilary Swank and Sam Rockwell. I [was in] a picture in New York right after my last episode [last season] of COVERT AFFAIRS with Ellen Burstyn called SOMEDAY THIS PAIN WILL BE USEFUL TO YOU, which is a wonderful director and a wonderful script, based on a book.

AX: Anything else you’d like to say about COVERT AFFAIRS or your career overall?

GALLAGHER: I’m delighted that COVERT AFFAIRS and my career seem to be coming along well. And I hope them to continue. I’ll certainly roll my sleeves up to keep both alive.