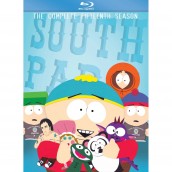 Another wickedly wild and crazy season with highs, lows and the typical brilliance sprinkled within the mix

It’s shocking to think SOUTH PARK has been on the air for fifteen seasons and still going strong.

Yet, here is the SOUTH PARK – THE COMPLETE FIFTEENTH SEASON to remind viewers that the series, regardless of its ups and downs, is still one of the most potent and funny sources of topical animated satire.

Now on Blu-ray, the 14 episodes provide a snapshot at what creators Trey Parker and Matt Stone do best – make sharp, skewered and funny observations about society (with a healthy dose of scatological humor thrown in for good measure).

Season 15 kicks off with a band with the hilarious “HumancentiPad” – an attack on Apple’s “Terms and Conditions” that people blindly agree to without reading the fine print. By not reading these, Kyle finds himself part of Steve Jobs’ latest experiment creating the latest “iPad” which involves sewing three humans together in a human centipede configuration (this is inspired by the movie THE HUMAN CENTIPEDE).

The references are sharp and on target throughout – it’s one of the funniest episodes of the season featuring everything that SOUTH PARK does right.

After a strong start, Season 15 hits a few missed opportunities. “Funnybot” seems to be a diatribe about what’s funny and what isn’t – with some thinly veiled references to Charlie Sheen’s troubles with getting fired off TWO AND A HALF MEN. “Royal Pudding” is also another awkwardly weird episode that doesn’t come together as well as it should.

“City Sushi” gets the season back on track when a war breaks out between restaurants City Wok and City Sushi – it has a twist revolving one of the show’s supporting characters and it’s quite funny throughout.

“You’re Getting Old” ranks as perhaps one of SOUTH PARK’s ten best episodes. When Stan celebrates his 10th birthday, the world around him as literally turned to “s***”. Nothing is funny anymore. Life is dull. He’s not a kid anymore. Then his parents decide to get a divorce and the episode ends on a midseason cliffhanger that’s as depressing as it’s ingenious.

The second half of Season 15 is sharper than the first. It pays off “You’re Getting Old” with the solid “Ass Burgers” and then hits a handful of highs including “The Last of the Meheecans” where Butters gets lost in Mexico and has to find a way to cross the border, “Broadway Bro Down” which is partially inspired by Parker and Stone’s experiences working on their hit Broadway musical BOOK OF MORMON and the hilarious “A History Channel Thanksgiving” that skewers everything from THOR to far-fetched conspiracy theory reality television.

The Bonus Features include mini-commentaries on all episodes – a tradition for Parker and Stone and offer some illumination to the mindset that went into each episode.

The real treat though is the documentary “6 Days to Air” which chronicles how a SOUTH PARK episode is created in, yes, six days. It was always a mystery how they pulled off coming up with the script, animation and dialogue recording in such a record time, but finally fans can see how insane this process works. The fact that they end up with so many great episodes utilizing this atypical process is a miracle.

The documentary is fascinating and engrossing – with the only negative is that it isn’t long enough. Here’s hoping they include one of these every Blu-ray release after this.

The remaining special features include some deleted scenes (nothing too hilarious there) and behind-the-scenes of “City Sushi.”

While it’s hard to sustain an animated series for five, let along fifteen years, SOUTH PARK has managed to do it out of necessity. Parker and Stone have found a formula for their topical sense of humor that while totally crazy, works for the show. It keeps the series fresh and continues to force them to find new ways to keep their interest and their fans attentions.