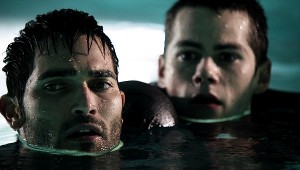 I hate to say this, because I love TEEN WOLF so much, but the latest episode “Abomination” was about as frustrating as you can get. Yes, it has some great effects, yes, the humor is there, yes I like the characters, but the pacing and the ultimate reveal of what the Shapeshifter looks like was kind of, well, anti-climactic.

We still don’t know who the Shapeshifter  is, but we learn what kind. It also has the ability to paralyze its victims with its toxic goo.

People who have the potential to be the Shapeshifter? Lydia (Holland Roden) is a possibility, but it would be way too obvious. There’s Jackson (Colton Haynes) who videotaped himself during the full moon, but he didn’t change. Yet closer inspection of his video reveals two hours was cut out and put on a loop. It would be interesting if it was him, but this Shapeshifter, clearly has been a Shapeshifter for a long time, so you need someone who understands what it means to be a Shapeshift. There’s the photographer dude with no name who has an active interest in Allison (Crystal Reed). It could be him, but that would actually be kind of lame if it were.

If the timeline actually tracked, Gerard Argent (Michael Hogan) would actually be a perfect Shapeshifter. It would be cool, different and actually make sense. A Shapeshifter Hunter, who wants to get rid of werewolves. That ain’t going to happen though (remember – timeline). There’s creepy teacher, who is another possibility. And then there’s Allison’s crazy mom (Eaddy Mays). I would love it to be here – because that would add a whole other dynamic to the Argents, but again, the timeline doesn’t add up.

So what actually happens during “Abomination”? Well, there’s a big lacrosse game, Grandpa Argent realizes Scott (Tyler Posey) is a wolf and plays games with him (and threatens him). Derek (Tyler Hoechlin) realizes he needs help to fend off the Big Bad Shapeshifter. And there’s a bunch of filler as the Shapeshifter taunts Stiles and Derek while trapped in the pool (the Shapeshifter hates water).

The problem though – a good chunk of the episode is spent in that pool as Stiles tries to save a paralyzed Derek from drowning – while the Shapeshifter taunts them by surrounding the pool. For me, this went on way too long – and wasn’t really all that tense or scary. There’s also the whole “does grandpa know Scott is a werewolf or not.” That gets old quickly. And there’s an extended lacrosse game, which bored me to tears.

TEEN WOLF is usually so good, and yes, but this episode didn’t do it for me. It’s the pay-off that sinks the episode. Nothing revelatory has been spooled yet. And it looks like the series is trying to put the Hunters and the Werewolves in a position where they work together to stop the Shapeshifter. I thought this season was supposed to be a war between Werewolf vs. Hunters.

I hope the series doesn’t detour too far and forget what made it special. There are so many wild subplots that the series is running the risk and messing with the very simple heart and core it’s had from the beginning. Frankly, I’d rather the show be only about werewolves and this Shapeshifter concept concerns me.

Only time will tell. There’s always next week for redemption and even when TEEN WOLF flounders (which is rare), it eventually ties everything back together in a nice little bloody bow.