Now this is more like it - and yes, the new shapeshifter is finally revealed 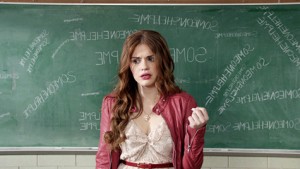 It’s about time TEEN WOLF started revealing some things, and finally it does with “Venomous”, an appropriately titled episode since it reveals a snake (i.e. a new form of shapeshifter) hiding in our core group.

After several episodes of teasing, “Venomous” finally offers up the big reveal about half-way through the episode, and while it’s not altogether surprising, I’m just relieved it’s a major cast member and not some insignificant newcomer or supporting player.

Do not read any further if you don’t want to know who the new Shapeshifter is.

The big thrust of this episode is Derek (Tyler Hoechlin) trying to sniff out who the Shapeshifter aka the Kanima. He’s narrowed the search down to Jackson (Colton Haynes) or Lydia (Holland Roden). His theory is simple: a snake can’t be harmed by its own venom. So he tests it out on Jackson – he’s poisoned, hence, not a snake. He tests it out on Lydia – she’s not affected by it. He believes, she’s the Kanima.

So Derek and his pack decide to go after Lydia and kill her, but Scott (Tyler Posey) is convinced she’s innocent – that there’s something about her that’s immune.

So Jackson, Stiles (Dylan O’Brien), Allison (Crystal Reed) and Holland hole up in Scott’s house, while Scott tries to stop Derek and his pack. Of course, that doesn’t work and his friends are under siege.

Then the big reveal … the Kanima is …. Drum roll … Jackson.

Okay, super cool. Jackson is the one that erased the two hours of tape, and his newfound physical strength has come from Derek’s attack. The question is, why is he turning into a snake like (or lizard like) creature and not a wolf? And what does Lydia have to do with all of this.

Lydia still seems in the dark about all the weird stuff going on, though, as with last season, it’s clear the girl is hiding some secret and I’m curious as to what it is.

Allison gets some in-your-face time with new wolf Erica (Gage Golightly) who desperately wants Scott like a dog in heat. She tells Allison how much she’s going to love stealing Scott from her — and then Allison one-ups her when she breaks into the house later.

One of the cooler aspects of the episode is during the last moments where Derek tells Scott that he’s figured out why he is so reluctant to join his Pack. It’s because Scott is already an Alpha himself and he has a pack – albeit a human one with his Scooby gang friends.

To me, that’s really the heart of this episode and it shows the difference between Scott and Derek. Sometimes it’s good to be transparent in TV writing. It really hit home something that was so obvious most of this season.

I’m pleased that we finally have the Shapeshifter revealed too. It makes it interesting that Jackson is potentially a Big Bad or maybe something that could potentially be controlled and become an asset to Scott’s pack.

Other cool bits, as always, it’s great to see more Coach Finstock (Orny Adams) and there’s more interesting stuff happening with the supporting cast that seems like throwaway moments, but actually hint at much deeper subterfuge. Such as the school psychologist who has taken a big interested in Lydia and her insistence on not opening up. And then there’s the photographer (who I still don’t think has a name) who now is fascinated that he can’t take a picture of Scott without getting a flash flare.

It’s all good stuff, and now that we’ve gotten past “who is the Shapeshifter”, TEEN WOLF can kick into gear for the next batch of episodes and the last half of Season Two.