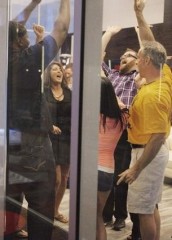 Things take a turn for the worse with this show

The BIG BROTHER knock-off THE GLASS HOUSE continues to progress despite being shown just once a week (I thought originally the show was going to be on three times a week but maybe the lack of ratings changed the network’s decision) and already you can see where only airing once a week is a bit of an issue.

Cramming a week’s worth of reality show into a single hour is a tough thing do, especially when the whole point of the game is to show how the interactions with people determine whether or not you should vote for them and how they are managing life inside of the house. Even with three episodes a week, BIG BROTHER can’t capture everything of interest and all the wheeling and dealing going on between players. But at least you get more of a sense of how relationships are stacking up and who is building a stronger place among the contestants and who is just skating by.

THE GLASS HOUSE can’t do that because they have to cram the events that the contestants do into the hour as well as eliminations and the strong points of interest. Here, we saw the elimination of Alex, the guy who wanted to be the worst villain in the history of reality television, go out with not a bang but a simple whimper as he was sent down the tube of doom and out of the game. There was no drama, there was not an ounce of interest but instead it just happened because that’s what the viewers decided (more on this in a minute). We also were told that Jacob quit the game because he’s a pussy (just assuming).

The biggest issue is with allowing the audience to vote for everything. This is the same issue that the first season of BIG BROTHER had. For one, it basically means those that have subscribed to the live feeds are making the majority of the decisions and not those of the casual viewer that are probably more inclined to just watch, rather than participate. This puts the power of the entire show in the hands of a few.

This also means they are governed by what viewers morally want.

BIG BROTHER learned from its mistakes in the first season and put the power back into the hands of those playing the game in Season 2. That made things so much better. Since the players actually had to vote for and kick out others in the game, it made things that much more powerful and their actions then had consequences ending with strong alliances being formed and enemies being clearly made.

We don’t get any of this with THE GLASS HOUSE because all of those decisions are out of their hands. So instead they just play the game pandering to the audience because they have now seen what happens when they don’t (see Alex). It removes a basic fundamental of reality TV in the strategic playing aspect and having to form relationships and backstab people in order to progress.

Related: Article: TV Review of the series premiere of THE GLASS HOUSE – Season 1