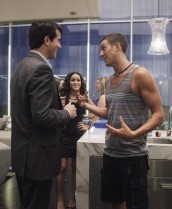 ©2012 Nicole Wilder/ABC
A scene with Apollo, Alex, Holly and Jacob from the premiere episode of THE GLASS HOUSE - Season 1
Reviews

It is BIG BROTHER but with some interesting tweaks

ABC has long been trying to start a reality show franchise that it can own outside of THE BACHELOR/BACHELORETTE and DANCING WITH THE STARS powerhouses. They have tried to copy THE AMAZING RACE and failed. They had a great reality show in THE MOLE that never seemed to get off the ground in terms of viewers even though it was awesome. Now, they are trying to copy BIG BROTHER with THE GLASS HOUSE.

Of course, this reality show made headlines before even airing because of the lawsuit that was brought against ABC by CBS in order to stop the network from airing something that, in essence, is a direct copy of the summer show.

Make no mistake about it. ABC can claim as much as they want that the show is different from BIG BROTHER in a variety of ways but that’s bunk from watching the series premiere. It is BIG BROTHER just with lots of bells and whistles. It has an overlord type voice commanding the 14 people in the house. They all live in bedrooms that are assigned and some are punished.

The one difference to the show is that the viewers apparently get to decide everything in the house. The living quarters, who goes home, who gets benefits and who gets punished. This is interesting because the original BIG BROTHER actually did this and it had mixed results, so they changed it so the people in the house get to decide.

You have your usual cast of characters: Jeffrey is the out-loud gay guy, Kevin is the hard-nosed police officer, Andrea is the Mormon girl that’s never done anything like this before, Ashley is the party girl, Joy is the sensitive but horny Playmate model (Joy, indeed), Stephanie is the brains of the operation, Robin is the A-typical older gal, etc. Of course, the one person that made the most waves in the house in the opening episode was Alex, who claims he wants to be the worse villain in the history of reality television. But instead of just being manipulative and creative, he insults everyone in the house with petty name-calling.

Unlike BIG BROTHER, it appears that the show takes place completely inside, whereas the other show at least allows them to go outside with a pool and some grass and sunlight. There is none of that here and the feel is one of being trapped inside a building you’d see out of a science fiction show. Don’t get me wrong, it is a nice house and very clean, just being trapped inside something like that might give someone a claustrophobia complex.

As I enjoy BIG BROTHER, this different take on the game is a nice change of pace from what we have seen over the years over on CBS. The only question is whether or not ABC will keep airing it if the ratings continue to disappoint (the opening episode was not well received).