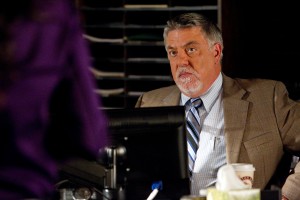 Executive producer Janet Tamaro, who adapted Gerritsen’s characters for the television series, is at present on one of the RIZZOLI & ISLES key sets, that of the cop bar the Dirty Robber. “This is its third incarnation,” Tamaro explains. “It was also on BOSTON PUBLIC, I believe.”

With Tamaro are actors Bruce McGill, who plays Detective Vince Korsak, formerly Rizzoli’s partner, and Jordan Bridges, who plays Rizzoli’s brother and fellow officer Frankie Rizzoli, Jr. All three bounce off one another, happy about working together on a show that is a success in both ratings and public affection.

ASSIGNMENT X: Did you want to develop these books, or did TNT come to you and say, “How do you feel about running this show?”

JANET TAMARO: Somebody brought the books to me, and I read them. I was in the process of writing a female buddy spec script. I was right in the thick of it, and when I got these books, I thought, “Well, if I’m going to do this, I need to make it funny, because otherwise, where’s the relief for me? I can’t do this for episode after episode if I can’t make myself laugh.” And you hope when you make yourself laugh, someone else will laugh with you [laughs]. But no, it wasn’t a passion project of mine, is the truth. Until I took it on, and then it turned into a passion project.

AX: You get some comparisons to CAGNEY & LACEY, as far as having two women who are best friends and professional crime-solvers working together …

TAMARO: Cagney and who? I don’t know what you’re talking about [laughs]. 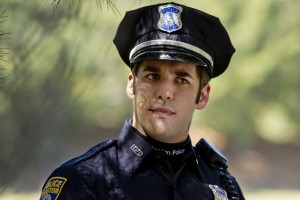 JORDAN BRIDGES: I see the resemblance.

McGILL: That’s why I fought for the goatee.

TAMARO: I do wonder – why did years pass before there was another female buddy cop show? That’s the thing I find so extraordinary. Why was it just CAGNEY & LACEY? Why aren’t there five other ones that you can think of.

AX: Although the subject matter is serious, RIZZOLI & ISLES has more comedy in its tone than many other forensic procedurals. Can you talk about the humor?

McGILL: Well, there is some [laughs], because I’ve got a strong feeling from playing that [humor], but always over a dead body. There’s either a body at the scene, a body in the morgue, and as regular cops in the real world, [seeing corpses] is their day to day life, and people like to laugh and be funny, no matter what their work is, whether they’re cleaning sewers or whatever. So the trick to get it is to get some of that stuff that’s actually written so it can be very funny without being foolish, and have [the humor] not only sanctioned but part of the writing so the rhythms are there, is a gift. If you play it well, it shouldn’t be jarring. I don’t know how audiences let us do that. They seem to be.

TAMARO: My former life was as a journalist, and I hung out with a lot of cops and a lot of cynical journalists, and as you know, that’s how you get through it. You talk about your life and you say things that, in context, are funny, that you couldn’t say to anybody else. And it was really important to me to mash together the dark and the light and to have those moments of relief, because that’s what real cops are like.

McGILL: But that’s where we reveal character. It’s not in the procedure. The procedure is bound by science and experience, but the humor is mostly out of character and relationships, and even though we’re not all in the same blood family, it’s very much a family show [in the sense that it is about a workplace family]. I think for things like this to live a long time, audiences have got to want to see, “Well, what’s that family doing tonight?” And hopefully we’re always doing something interesting.

TAMARO: And one other thing – we cast brilliant actors who are also comedians, and that was wildly helpful in delivering funny lines. They’re all very, very good at the humor and also making those fast turns from the dead body to the funny joke.

BRIDGES: And I think when you’re in the midst of an autopsy or dealing with someone’s organs, and then all of a sudden, you start talking about what you’re having for dinner that night, it’s a natural kind of conflict that makes for really fun humor. Not that that was a specific example, but just for instance. And I think it’s great that [the writers] give us that opportunity.

TAMARO: I knew Angie Harmon’s work, for example, from LAW & ORDER, and I saw her as this tough prosecutor. I didn’t know how funny she was in real life, I just thought, “Okay, she can play a kick-ass cop.” And then when I met her, I realized, “Okay, she’s the whole package. She’s funny, too.” The same with Sasha Alexander – Sasha is a wonderful physical comedian. [McGill] I knew, and [Bridges is] an up and coming rising star here. Lorraine [Bracco, who plays Rizzoli’s mother], I’d seen all her film work and I was a huge SOPRANOS fan, huge. And just the idea of having her play the mother was so enticing and I don’t know that I knew she was funny until the pilot. She brings all this kind of daffy warmth to that part. I was going to make her a little bitchier and I fell in love with who Lorraine is under all of the GOODFELLAS.

McGILL: It’s all about, too, with the family winding up Angie, winding up Rizzoli, getting more colors out of her. And she is a willing wand. I mean, you play a scene with Angie Harmon, and you play it fully, and she will not miss a thing that you do. A lot of actors, they’re busy with what they’ve built in their rehearsal process, but [working with Harmon] is like playing jazz music. It’s really rare and it’s really great, especially with good writing that turns human corners, instead of just procedural corners. And I know people who do these procedurals that are just purely procedural, and they get bored. You go to guest on one of them, and here are these people with these great jobs, and they’re as bored as the face of a fish. “Oh, the Mercedes is here? Okay.” I’m not kidding. This guy had delivered to him, because his hours were crazy, this magazine-cover, hundred-and-fifty-thousand-dollar Mercedes, and somebody might as well have just said, “Your latte is here.” And I thought, “May I never be that guy.” Or the guy bringing him the latte.

TAMARO: Yeah, exactly. And I’ve thought about that as I was writing [RIZZOLI & ISLES], because I’ve seen it, too. I mean, if you give actors [dialogue like] “low-velocity blood spatter” every time, I thought, “Where do they go with that?” [laughs] I like to see the different colors that they have, and I like to see them in the same episode. [playfully dramatic] I love bringing them to tears, laughter and pain. Because otherwise all of us get bored. I get bored as a writer, you get bored as audiences …

McGILL: When I was deciding whether to do this or not, I got the script, and I had done mostly features for years. And I get the script and I read it, and I go, “I don’t know.” It’s pilot season, there’s a lot of pilots. I said, “This is really interesting.” Because I love the dog thing [Korsak’s love of animals]. And I handed it to my wife, and she read it, and we’re talking about a few scripts, and I said, “I don’t know, a cop show …” She said, “That’s not a cop show, that’s a chick show.” I went, “Whoa!”

TAMARO: She’s a genius, that wife of yours.

McGILL: I played it broadly for laughs, because I’m made up of a car and a cat and a dog.

TAMARO: You did have a cat and a dog. They made me take the cat out.

McGILL: I mean, in the audition.

BRIDGES: And he did sound effects, too.

McGILL: I did the dog and I did the cat and I did whipping around and I took the room and it was a really fun, funny audition, I thought. Well, you guys laughed. [to Bridges] You were there.

TAMARO: And you were so funny, you got the job, Bruce.

AX: Speaking of playing dogs, you were a werewolf pack leader in WOLF LAKE.

McGILL: Yes, I was. I liked that. I thought it was pretty neat. I was sorry it went, but I was only signed up for five [episodes]. This is the first [series] commitment that I’ve done, ever. Even MacGYVER, I was only recurring.

AX: What made you decide to do a series now?

McGILL: You know, it’s all material-driven at this stage of my career. I like this material and I like the players. I love Angie – we go way back. She’s more fun to work with. But yeah, if it’s good material and I’m available – I like to work.

AX: And speaking of doing comedy, do people still come up and ask you about ANIMAL HOUSE?

McGILL: Absolutely. I’ve played my throat at every airport in the Western world.

AX: Did you expect ANIMAL HOUSE to take off and be as iconic as it is?

McGILL: We knew it was funny, but you can’t project in 1977 that it’s going to weave its way into the nation’s sociology as it has. I’ll quote the movie – “It’s something that never looks bad on your permanent record.”

AX: Because this topic has been discussed in other publications, including TV Guide, with shows like BONES and CASTLE, everybody’s going, “Hey, let them have a romance.” Would it be catastrophic for RIZZOLI & ISLES if they did?

TAMARO: Who’s the “they”? These two [indicates McGill and Bridges], you mean?

AX: Well, that would be a whole different issue.

TAMARO: No, Season Seven, I see it.

AX: No, the characters Rizzoli and Isles.

AX: Not in response to an external audience demand, but just, do you think it would unbalance the show if the friendship turned romantic?

TAMARO: Well, think about shows that ended once they kissed.

McGILL: Yeah. There’s something that drives a lot of shows – a lot of sitcoms as well – unresolved sexual tension. I’m sure you’ve heard of it. And it can go in many directions – there’s nothing wrong with that. But resolving it, which is once they kiss, it’s over.

TAMARO: It often is.

AX: For Mr. McGill and Mr. Bridges, who do your characters have unresolved sexual tension with?

BRIDGES: [joking] Definitely Bruce and I have some stuff we have to work out. [serious] No, no. [Last  season], there was an interesting old flame that kind of [threw] a monkey wrench into the workings of our family for a little bit. So I think that [Tamaro] is not making these people chaste, or without relationships or without any kind of sex in their lives.

TAMARO: They do have sex. Most of it’s off-camera, because we’re on TNT [laughs].