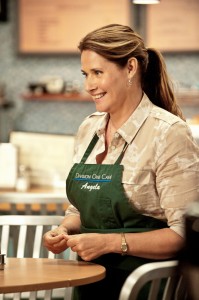 RIZZOLI & ISLES, concluding its second season on TNT tonight, is a fan favorite. Not only is the series, based on Tess Gerritsen’s novels, a snappy crime-solving procedural, but it provides a view of supportive female friendship between its leads, Angie Harmon as police detective Jane Rizzoli and Sasha Alexander as coroner Maura Isles, that is rare on television.

This season, Maura has opened her home to Jane’s recently divorced mother Angie, played by Lorraine Bracco. Both actresses, as well as series production designer Bruce Miller, are on hand in the set for Maura’s living room. The space is beautiful, airy and wonderfully detailed – for example, a large ornamental pot turns out on examination to be made of thousands of tiny seashells. Visual themes running through this environment, as well as Maura’s office set, include both water and death, with the skeletons of starfish and other marine life on display. The two performers and the designer zing off each other with relaxed ease as they answer – and sometimes ask each other – questions about their work on RIZZOLI & ISLES.

ASSIGNMENT X: Did you have any input into any of the production design elements in your character’s home?

SASHA ALEXANDER: [Series creator/show runner] Janet Tamaro and I had a conversation when they were doing the house and the office, and it was really just about style. I said to Janet, I felt like [Maura] was Provence-meets-Bali. I felt like this was someone who was well-traveled, who clearly has a quirky and eclectic eye and might have picked up things along her journeys. Bruce is our production designer, and he put that together. So he did an amazing job. These are all new sets this year.

AX: Is there a narrative reason for Maura’s interest in the ocean, based on the production design of the home?

BRUCE MILLER: They’re dead things. We didn’t realize it when we started, but it’s all skeletal, and as it kind of blossomed – she’s been around the world, she’s been in the ocean – the images I thought were really interesting, with fluids, and then the shells came out. She deals with dead humans and then she brings all the dead animals and skeletal things that have some beauty to it. We didn’t develop it that way. It just kind of happened. And then the decorator came in here one day and said, “Gee, I’ve created all of these skeletal things.” She deals with skeletons, and she brings the same thing to her house, but it’s the beauty part of it.”

ALEXANDER: [Maura’s] office [set has] the most amazing picture of five women doing an autopsy.

MILLER: That was a college inNew England, I believe.

ALEXANDER: And it’s a real photograph. I also have to add that I feel like in this space [the sets for Maura’s home], and also in Maura’s office, the beautiful thing that they did was add a tremendous amount of humor to it as well. It’s eclectic, it has personality and it feels like these things were found along the way.

AX: Maura Isles is the second medical character you’ve played, after being on PRESIDIO MED. Are you attracted to clinical roles?

ALEXANDER: These are the only two doctors I’ve ever played. I loved playing Dr. Jackie, but she’s a very different character than Maura is. [Jackie] was kind of a prodigy and she was very arrogant and she was sort of a hotshot. So I didn’t really think of her as clinical – she was a doctor, but her personality was different. This is very science-driven. I have so much dialogue sometimes that’s stuff that is happening in Maura’s brain that it’s almost like it’s just going on and it’s not connected to what the other people are feeling or doing. So it’s a very different character. I like it – I learn a lot. As Sasha, I’m not that scientific and mathematical in my thinking, so it’s fun to play a person that’s smarter in that way than yourself.

AX: Were either of you as actresses looking for another series at the time that RIZZOLI & ISLES came along?

LORRAINE BRACCO: I’ve always just looked for material that I think I could do well. I think that’s my criteria of finding work. And I knew about Tess Gerritsen’s books, I’d read them, I’d been a big fan for a long time, so when it came up, I said, “Ah, somebody finally got it together.” And I knew Angie was cast and I thought was a great Jane Rizzoli, and I thought I could be a good mama [laughs].

AX: Can you talk about the humor on RIZZOLI & ISLES? Granted, the show deals with homicides and autopsies, but it is often very funny.

ALEXANDER: [laughs, then, to Miller] Do you want to talk about it?

ALEXANDER: Fast and funny. That’s what I was told by the directors – fast and funny. From my perspective, if you’ve read the books, which I love, there’s not that much humor, so they’re much darker. But when we did the show last year, one of the things that Janet Tamaro and Michael M. Robin, who directed the pilot, liked about what I was bringing to my character was that there was a little bit of that lightness, that there was that humor. They liked the banter. I think somewhere along the way, putting this cast together, we did all have a sense of humor, we had a certain way of interacting, and it started to become more and more humor. As you see sort of in last year’s episodes and then clearly in this year, I think they’ve embraced it with all the characters. I had a scene with this one [Bracco] a couple weeks ago – she had me on the floor every time she walked in, and she didn’t realize that it was so funny. She wasn’t trying to be, it was just that she comes in and she catches Maura with a man and so she’s a bit taken aback, because she doesn’t know who the guy is. It’s just hanging around in the kitchen here, but she’s still curious, so there’s this kind of, “Do I stay? Do I go? Who’s this handsome guy?” [laughs]

ALEXANDER: She’s hilarious. Look at her.

BRACCO: I keep getting the direction, “Faster, faster.” And I’m like, “I don’t know how to do that.” I’ve been watching a lot of LUCY.

ALEXANDER: It’s a little bit like shooting a zombie movie, where you have [material] that can be kind of this screwball funny stuff happening with the characters, and then all of a sudden, you have this crime that is rather gruesome. I’m working with intestines and digging into people, and yet the emotional context of the scene might be something that is really rather funny.

AX: Do you think that the popularity of this show is because it reflects women’s friendships honestly, or do you think it’s the friendship that people would like to have with each other?

ALEXANDER: I don’t know the right answer to that. I think both. In my opinion, I think you [Bracco] agree as well, Angie and I have spoken about it – every time we have read the scripts, in terms of the relationships between the women, we have felt a camaraderie and a certain natural behavior. There’s nothing in it where I’ve felt like, “Oh, that woman would never do that.” If anything, I’ve felt that it pushes those boundaries. In television, a lot of times, I have personally had experience of, “Well, you don’t want to be too angry as a woman and you don’t want to be too sexy, and don’t want to be too this or too that.”

BRACCO: I want to be all of those things [laughs].

BRACCO: Also, we’re starting to really know each other much more this season. First we did the pilot, then we all kind of scattered, then we were picked up. It was different last season. I think we all just did our work and were trying to find our characters. Now I think we know our characters and we’re really getting to know each other a lot better. I think there’s a big part of that.

ALEXANDER: I do, but I also think as far as, there are so many women that really [relate to the characters]. And men, but men are more curious. Men are like, “Is this really a true representation [of female friendship]?” And I think any woman that has had a true female friendship can relate to this, because I do think that Janet writes from the heart, and I do think that she writes from her experience as a woman, as a mother, as a friend. She really does. I think women do relate – I’m told all the time, “You know what? This reminds me of my friendship with So-and-So.” And I think [it appeals to people] that [Rizzoli and Isles] are very different women, that they represent different spectrums and that they could work [with each other] and not be competitive and catty, but can actually be respectful and supportive of each other.