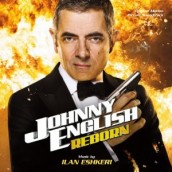 If  Christophe Beck does his musical all to pump up the frequently inept robbers of TOWER HEIST  into master criminals, then Ilan Eshkeri has the even mightier job of turning Rowan Atkinson’s catastrophically inept 007 wannabe into a super agent who’ll out-Bond Connery for JOHNNY ENGLISH REBORN.

Eshkeri outfits himself with the comedy secret agent score checklist of a swaggering main theme, trademarked fuzz guitar, rocking exotica for the luxurious locations he’ll fight through, and lush, John Barry-esque strings, for the sinister villains and lovemaking he’ll have to endure. It’s a jacket that’s been to the cleaners many times by now, no more so than by serious spy scores that have been furiously finding new ways to make use of the pop-orchestral template that was truly established in FROM RUSSIA WITH LOVE. Sure Johnny English is REBORN in this manner for the zillionth time. But it’s all how you wear the tux, which Eshkeri does in smart style.

Thankfully, Eshkeri isn’t out to re-invent the musical wheel that composer Edward Shearmur established so well for the first ENGLISH. Instead, he continues its throttling, accident-causing sound with just as much symphonically exciting flair. While this greatly pleasing sequel might be a bit smaller in scope than the original, there’s nothing about the score that would clue you into it, from the dynamic pan-Asian action of a “Rooftop Chase,” the jazzy, sensual cooing of “Hypnotification,” “Lipstick Gun”s insanely dangerous suspense or the choral resurrection of REBORN, Eshkeri’s music playfully pumps up the adrenalin throughout, making Atkinson very macho indeed, while also playing to his bumbling sweetness.

If the first ENGLISH was a hilarious riff on “Goldfinger”’s megalomania, then this sequel is a delicious spin on LICENSE TO KILL, musically making things personal for a disgraced and on-the-lam Johnny. While necessarily light in tone during his desperate attempt to clear his name, Eshkeri actually manages to put in a bit of emotion along with the “this time it’s personal” danger, with punchy announcements for the bad guys that are just this side of being overtly comic. But if anything, it’s this one degree of separation that’s what separates a mock spy score from the real deal. A tilt either way could have ended up perfectly suited for a funny animal with a goofy gadget, or gone the way of Daniel Craig sporting a Walther PPK. In JOHNNY ENGLISH REBORN’s case it’s the latter for this aardvark-ish agent.