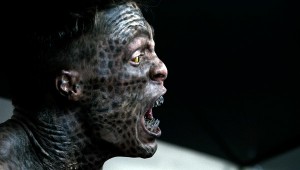 Now that we’re safely at the mid-way point of the second season of TEEN WOLF, the story continues to progress in “Frenemy” at a rapid fire pace delivering a great looking and written episode that progresses many of the show’s themes, but also delivers a couple more surprises as well.

In a way, TEEN WOLF is a 13 hour movie – since there’s usually not a lot of down time in between episodes. This episode picks up, right where “Venomous” left off with the gang tracking the snake-like Jackson (Colton Haynes) who has become a shapeshifting Kanima when the mark of Derek (Tyler Hoechlin) failed to make him a wolf.

Yet, the big reveal is that even though he’s killing people, he’s being controlled  by something else. Apparently the botched translation of what the Kanima has nothing to do with it looking for a “friend” but rather looking for a “master.”

Yes, Jackson is being controlled, but by whom is the latest mystery.

As Scott (Tyler Posey) and Stiles (Dylan O’Brien) start searching for Jackson, they end up a gay bar where Danny (Keahu Kahuanui) is at, searching for a hook-up. Danny is Jackson’s best friend and he’s been helping him decode the video he took the night he first transformed. Two hours were wiped or deleted or something, and he’s figured out a way to reveal what happened in those two hours.

Well, Jackson shows up as the Kanima to kill him since he might know the truth about something (or he’s being controlled – either way, he’s in trouble). A bunch of people get injured, but no one killed. Stiles and Scott though, take Jackson, lock him in a police vehicle and try to convince him of what he’s become.

Meanwhile, Allison’s (Crystal Reed) grandfather Gerard (Michael Hogan) has stepped up security at the school and around town with cameras everywhere (still wondering how the Hunters have so much dough to do all this and to control this small town – hopefully we’ll find out sooner or later). Even Allison’s weirdo mom (Eaddy Mays) shows up as a substitute teacher at school.

Gerard has a plan though, he’s going to use the Kanima to kill their enemy Derek.

Lydia (Holland Roden) continues to be a very strange enigma. She wants to know what’s really going on, but no one will tell her. Yet, her super smarts still hints there’s more to her than she is revealing as well. A guy she barely even met at school counseling shows up too and hits on Lydia. We don’t know his name either.

So, there could be a tie to him and the creepy photographer dude with no name as well. Since the photographer dude lent Jackson the camera to record with, maybe he was the one who deleted it. We also are  reminded Jackson was adopted – could this mystery guy be related to Jackson?

Oh, the joys of a layered mystery. And it keeps getting better and better. Director Mulcahy returns this week and the opening fight between the Kanima and Derek is pretty awesome. It brought back memories of the Mulcahy directed HIGHLANDS films.

The make-up effects on TEEN WOLF is stellar, and the Kanima is effectively creepy and shot perfectly in shadowed light so it never looks cheesy. The CGI enhancements are also seamless. Few shows (and even movies) struggle with making these kinds of blends work (hell, most directors don’t know how to shoot practical effects any more if their life depended on it), so it’s refreshing when a series gets it right.

Hail TEEN WOLF. The show has survived the initial rockiness of who the Kanima was and now they’ve got all the pieces in place for what should be an amazing second half. With Scott getting his own human wolf pack, wouldn’t it be cool if Jackson actually sides with Scott’s pack if (and when) the control of Jackson is lifted?

[Editor’s Note: Story has been updated to clarify plot points about the show]