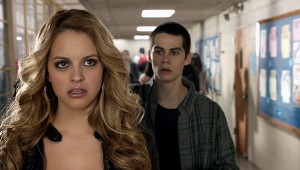 Once again, TEEN WOLF continues its feature film quality and delivers another great episode with “Restraint.”

Of course the title could be further from the truth, since this episode is packed with non-stop action and plot turns. Restraint is the last thing on its mind as all the pieces of a very elaborate puzzle are being laid out with fantastic results.

The plot elements for this episode follows the aftermath of Jackson (Colton Haynes) getting a restraining order on Stiles (Dylan O’Brien) and Scott (Tyler Posey) after last episode where they were trying to protect him from hurting others. Even with the restraining order, they keep running into each other. We now know the Kanima is a weapon of vengeance and that Jackson’s parents died the night he was born.

Jackson, as the Kanima is being controlled, but we still don’t know by whom. However, we do get a great Jackson vs. Scott fight, plus a snake crawls into Jackson’s mouth and then regurgitates out of his eye socket. Very cool stuff.

Toss in the Kanima going after an unborn baby in a mother’s room and there’s definitely some weird stuff going down.

As for Lydia, she is attracted to this teen boy she keeps seeing, and SPOILER ALERT, we discover it’s a hallucination. The teen boy is the spirit of Peter Hale (who died last year and marked her). Since she’s immune to being marked, she can do the one thing nobody else can do. It’s not stated, but I think it’s pretty clear she’s the one who will resurrect Peter Hale.

Other revelations: Scott’s mother is starting to suspect there’s more going on, Allison’s mom (Eaddy Mays) finds out from Scott’s mom that her daughter and Scott are having sex, and photographer dude reveals he is crushing on Allison. 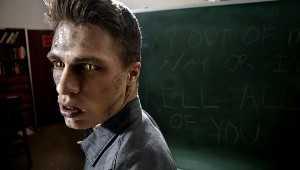 There’s some great physical comedy in this episode from O’Brien, plus we get some natural reaction from parents regarding the strangeness their teens are exhibiting (something that is rarely done in TV shows or movies of this kind).

We still don’t know who is controlling the Kanima, but Scott agrees to join Derek’s pack as long as they take down Jackson his way (which means capturing him, not killing him).

Crisp writing, excellent direction and another worthy cliffhanger make “Restraint” another stellar Season 2 episode. A thirteen episode season is way too short for a show as great as TEEN WOLF.