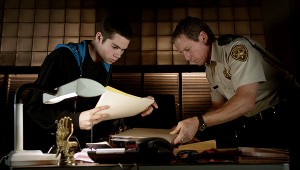 The stakes are raised once again with TEEN WOLF in the exceptional new episode “Raving” that sees even more twists tossed into the mix.

At the forefront is Jackson (Coloton Haynes) still not understanding he’s become a psycho shape-shifting Kanima snake creature being controlled by someone even more nefarious.

Scott (Tyler Posey) and his makeshift teen team get closer to the truth and learn that the person controlling Jackson claims to be “dead”. It could be Peter Hale, but that might be the easy way out. I’m still thinking it might the teacher who has been given the kids trouble.

Most of the action takes place at a rave, where Jackson is looking for his next victim. Stiles (Dylan O’Brien) and his Sheriff dad (Linden Ashby) actually find a connection. All the people who died were in the same class together in high school many years ago and the person controlling Jackson says they were responsible for killing him.

Meanwhile, Mrs. Argent (Eaddy Mays) takes her hatred toward Scott to a new level – planning to kill him with wolfsbane. However, Derek (Tyler Hoechlin) comes to the rescue to save him – and gives Mrs. Argent the bite of the werewolf.

The moment at the end where her husband and werewolf hunter Mr. Argent (JR Bourne) realizes what’s happened is one of the biggest and coolest twists so far this season (in a season filled with great twists).

Even though there’s some bloodshed and ample horrific moments, it’s the quieter character moments that really hit home why TEEN WOLF Is so great.

Allison (Crystal Reed) and Scott have a touching John Hughes-esque moment where Scott feels the two of them should see other people to throw her mom off their scent since she’s getting a little too psycho about them secretly dating. It’s a quiet moment, but it’s Reed’s performance and the nuances and emotions she displays in these moments which showcase what a talented actress she is. It’s heartbreaking and Reed has been a solid center to the show’s teen angst moments.

Another really great moment happens with Stiles discovers his dad has been put on a leave of absence because of all the trouble Stiles has been getting in. Yet another great parent-child moment on the series that rings so heart-breakingly true, despite the fact there are werewolves and shape shifting snake creatures running around.

The guidance counselor shows up at the vet’s at the end hinting there’s bigger trouble on the horizon and these teens may not be ready for it. What this means, is a mystery, of course, but it’s nice to know there’s no slowing down this fast-paced show.

Next week’s episode promises the reveal of who is the Kanima’s master – which comes at the perfect time. With TEEN WOLF renewed for a 24 episode third season, MTV has finally realized this show is fantastic and deserves more time to tell its incredibly entertaining stories.