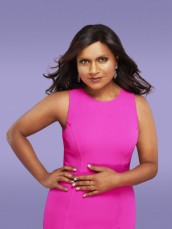 Her new Fox show THE MINDY PROJECT debuts in the fall

After playing Kelly Kapoor for eight seasons on NBC’s THE OFFICE, Mindy Kaling is moving on to THE MINDY PROJECT, a show she created and stars in for the Fox network and which debuts in the fall.

However, the fate of Kelly will actually have some closure, as the actress explained while at Fox’s Summer TCA session for her new series.

“I’m heading back [to THE OFFICE] and I think I will be in premiere, which I’m excited about, and maybe another episode,” reveals Kaling. “That was great. I got attached to that character even though I had a line maybe every episode. It will be fun to see what happens to Kelly.”

Other THE OFFICE alum will also make appearances, including Ed Helms in a special guest appearance in the pilot episode as a potential love interest, and her former THE OFFICE boss Greg Daniels will be directing an upcoming episode of THE MINDY PROJECT.